US No.1 star bags four awards 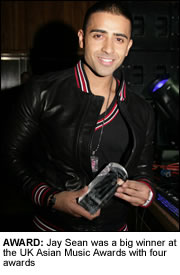 JAY SEAN was a big winner at the UK Asian Music Awards – winning every category he was nominated in.
The R&B star, who was sensationally snubbed at the Brit Awards last month, walked away with the Best Male, Best Album for ‘All or Nothing’, Best Video for his smash hit American number one single ‘Down’, and Best Urban Act.
The night capped a prolific year for Houslow-born Sean, who shot to number one on the Billboard Hot 100 last year, becoming the highest selling British artist in America since Elton John.
Other winners on the night included Dutch star Imran Khan who won the Best Desi Act award and singer Amar who won Best Female Act.
A host of music stars joined in on the UKAMA festivities which were held at London’s Royal Festival Hall.
Asian music stars, including Dutch star Imran Khan and Universal’s latest dance diva Jaya, were joined on the ‘blue carpet’ by boxing champion Amir Khan, actor Jimi Mistry, and British urban artists Chipmunk and the Sugababes.
Abs Shaid, founder of the UKAMA’s said: “Year on year we are making sure we provide a cutting edge event to acknowledge the contribution of Asian artists in the UK. This year Asian artists will continue to make ground breaking moves in this country and abroad and the UK AMA will keep supporting and recognising their achievements.”
Click here for more pictures from the UK Asian Music Awards 2010