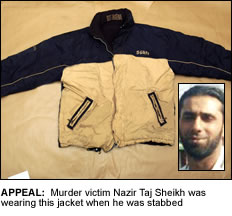 Officers investigating the murder of a Leicester man have released a picture of his jacket to help identify his movements prior to the attack.
Nazir Taj Sheikh, 36, received a stab wound following an incident in the St Saviour’s Road area of Leicester at about 3.48pm on Monday March 8.
A post mortem examination revealed he died from a single stab wound.
Mr Sheikh was wearing distinctive beige and black jacket at the time of the incident and officers investigating the murder are particularly keen to speak to anyone who saw someone fitting the description of the victim prior to the incident taking place.
Superintendent Craig Moore is leading the enquiry, he said: “We believe that the victim was involved in an incident on St Saviour’s Road, near the alleyway which leads to Grove Road, and then collapsed in Grove Road.
“I urge anyone who hasn’t already contacted the police to get in touch if they were in St Saviours Road between 3.30pm and 3.50pm on Monday (March 8), even if you didn’t see anything we need to speak to you to eliminate you from our enquiries.
“Mr Sheikh was very well known in the area and I am appealing to anyone who saw him prior to the incident to contact us.  Any information no matter how small could help with our enquiries.”
Related Articles
Murder victim died from stab wound
Leicester stab victim named