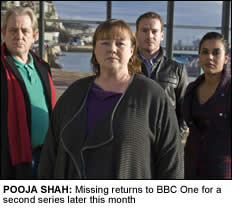 ACTRESS Pooja Shah will return to our screens this month in the hugely popular BBC One daytime drama Missing.
Back for a second series the drama is set in a Missing Persons Unit and stars actress Pauline Quirke.
Pooja Shah plays Amy Garnett – a civilian hired in as a specialist on the MPU.
This year the former EastEnders’ actress is enjoying passing on some of her TV acting experience to classes of eager young students at a weekend drama school in London.
“I teach kids stuff they wouldn’t necessarily normally learn in drama school, or even by doing a drama GCSE. Things like what it is actually like to be on a TV set, shots the director will want, finding your mark, and what all the terminology means – all the practical stuff that you learn as you go along,” the actress reveals.
“It’s a great opportunity to teach them the things you never get taught and to give them a bit of a heads-up on all the mistakes I made!
“I feel like a bit like a mother, I love it. It’s wonderful being able to pass on anything I can to help people. I don’t necessarily say that my way is the right way, it is just an opinion, but I want them to learn from my mistakes as well as the good choices I have made. It also keeps me in practice and it is nice to see things from a different point of view.”
Never one to sit around and wait for the next acting job, between TV projects Pooja is also learning how to be a driving instructor.
“I asked my dad what he thought and he said ‘yes do it’. It’s something I can fall back on if I ever have to, and it means I don’t have to go back to temping work which I didn’t enjoy.
“If you are self-employed you are your own boss and you can dip in and out of it. I thought it is not a bad skill to have and I can learn at my own pace.
“Even if people use the fact that I am on the telly as a novelty reason to learn from me – I don’t mind if it means I get students!”
But Pooja admits it took her five attempts to pass her own driving test. “It is quite hilarious that I am going to be teaching people. Five is probably too many times, I wasn’t really paying attention when I did it. But I think I am OK, I have been driving long enough and people are quite happy in my car.”
In this new series of Missing the fallout from the breakdown of the relationship between Pooja’s character Amy and Felix is difficult for them both.
“It feels like the roles are reversed this time around. He was much softer last time and had a gentle side, and Amy was harder with her approach to work. She was new and keen to impress and saw Jason as her rival. He just saw her as someone he wanted to date.
“This time she is softer and you see her vulnerable side. She doesn’t put her work first anymore and you see Jason as the stronger character and he is determined and focused on getting his promotion.
“But you also see Jason lose it a bit and Amy has to step up and be more responsible. They still have a lovely relationship, and they do still look out for each other.
“Missing is probably the only job where I have been away from home and not felt homesick because I feel like I am home. It was like we had never been away when we started filming this series, we just picked up where we left off, we have lots of fun and I adore them all.
“I would like to teach Felix how to drive – he rides a bike at the moment. But I haven’t had a student in my car yet – so I’m not sure how I will be!”
Missing, Monday 15 to Friday 19 March, 2.15-3.00pm BBC ONE