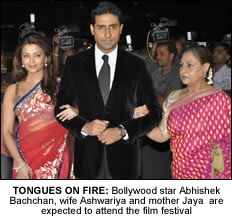 BOLLYWOOD fans in the UK will get the chance to interact with some of the biggest names in the Hindi film industry at the Tongues on Fire 12th London Asian Film Festival.
The festival launches today and will run until March 14. Leading Bollywood figures are scheduled to attend including Abhishek Bachchan, Aishwarya Rai, Jaya Bachchan, Soha Ali Khan and Sharmila Tagore. The festival will give audiences the chance to see some of Bollywood’s biggest hits of the last few years in London’s West End, including Tarun Mansukhani’s Dostana, Mani Ratnam’s Guru and Shimit Amin’s Chak De! India.
A BAFTA interview with Abhishek Bachchan will open the festival later today, celebrating the cinematic achievements of Junior Bachchan.
The event will be followed by an Opening Gala Dinner where Jaya Bachchan, the first lady of Bollywood, will be presented with “A Lifetime Achievement Award” for her contribution to the Indian film industry. Abhishek, who was nominated for Filmfare awards for his roles in Bunty aur Babli, Guru and Dostana, is scheduled to deliver an Actor’s Masterclass, giving film practitioners and cinema lovers the opportunity to interact with their idol and learn what makes him and the characters he plays so successful.
Festival Director Pushpinder Chowdhry believes Asian film has the feel good factor and the ability to speak to a wide range of audiences.
“This year’s Tongues on Fire couldn’t come at a better time. With My Name is Khan smashing records at cinemas around the country to become the most successful Bollywood film in British box office history, it’s the perfect time to celebrate the achievements of Asian cinema,” she said.
Tongues on Fire also celebrates other South Asian cinemas, as well British Indian films such as the Om Puri starrer Life Goes On, which has its premiere screening at the closing night event with actors Sharmila Tagore and Soha Ali Khan. Pioneer of middle cinema Shyam Benegal, whose Well Done Abba is being shown, will be giving a film direction workshop and taking part in a BAFTA interview.
Festival patron, the writer, actress and comedian Meera Syal says: “I have been very proud to be associated with Tongues on Fire over the years – both as an excited viewer, and also as a participant, and am honoured to be the Patron of the Festival.”
For details of festival events log onto www.tonguesonfire.com
Steven Baker is a Hindi film journalist and post graduate in Indian cinema