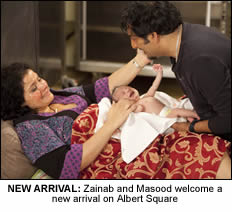 ALBERT Square will welcome a new arrival next week – after Zainab Masood gives birth to baby Kamil.
But in true EastEnders fashion, nothing is ever as simple and when Zainab finds herself locked in the Masala Unit after going into labour, dad Masood Ahmed is forced to deliver his son.
The drama kicks off after Zainab walks in on elder son Syed and his ex gay lover Christian in a clinch.
When she confronts the pair they argue. But when the boys storm out, the door locks behind them and Zainab is trapped inside. Her cries for help are unheard and she begins to feel the first pangs of labour.
When Christian returns to the Masala Unit he hears Zainab’s screams for help and kicks down the door.
Realising she is in labour he rushes to get Masood, who on arrival decides he must deliver the baby on his own – despite having no idea what to do.
Meanwhile actress Nina Wadia, who plays mum Zainab, has revealed she will appear in Dr Who this spring.
The actress revealed she will portray an evil psychiatric doctor, the Sun newspaper reported.
“I play a bit of a baddie. And yes, like my EastEnders character Zainab, she’s not a very pleasant woman – but at least I’m human and not some kind of strange alien life-form,” she said.
Before then you can watch EastEnders dramatic scenes unfold from Monday 22 February on BBC One.