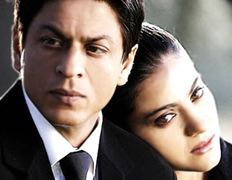 ALTHOUGH the Indian release of My Name is Khan has been marred by protest over actor Shah Rukh Khan’s comments about the non-inclusion of Pakistani cricket players in the Indian premier league, at the first UK screening of the film, the mood was one of excited anticipation.
Enlivened fans and film critics were in attendance at the Wednesday night advance showing at Cineworld in London’s Leicester Square. Expectations are high for the Hindi film, particularly after last week’s global publicity tour of the MNIK team, which saw Shah Rukh Khan and Kajol in New York ringing the bell for the NASDAQ, followed by promotional events in London including SRK’s appearance on Friday Night with Jonathan Ross.
The tagline of the story “My name is Khan and I am not a terrorist” lets you know from the outset that Karan Johar’s cinematic vision has moved on from his earlier oeuvre of Kuch Kuch Hota Hai and Kabhi Kushi Kabhie Gham, receiving applause from the London audience the first time the line is delivered.
The film starts with a flashback, looking at a young Rizwan Khan, a Muslim with Apserger’s syndrome, played initially by child actor Tanay Chheda; who you will be familiar with from Slumdog Millionaire. The plot shift locations from Mumbai to San Franciso and as an adult, we see Rizwan (Khan) marry Hindu single mother Mandira (Kajol). Hindi film fans obsess over the screen pairing between Shah Rukh and Kajol, and luckily here they do not disappoint. The two may be older and wiser than their 1995 outing Dilwale Dulhania Le Jayenge, but the chemistry is still very much there, and their performances emit the gravitas and sensitivity required for this type of cinema. Johar has gone on record to say this film charters newfound territory, and in the first half of the movie his maturity shines through, with a focus on the narrative and a simple telling of the story. Gone are the show-stopping numbers with a cast of a hundred Russian dancers, and choreographed North Indian wedding scenes. Fans of Johar, however, need not fear, as the director still inserts his characteristic film tropes: the park bench, the sweeping skyline and a saccharine let’s-fall-in-love song picturisation.
It is not until an hour into proceedings that the plot shifts genre from love story to terrorism, as the characters are impacted by the new world order following the 9/11 attacks. Like recent Bollywood releases New York and Kurbaan, the impact of terrorism on Indian Muslims is an element that is addressed. You may recall Khan himself was detained for several hours arriving at Newark airport, facing ‘Muslim while flying’ discrimination by US customs officials 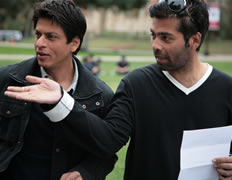 Post interval, a tragic incident separates Rizwan and Mandira. Here sit up for some of the finest acting on display by Kajol, and be ready to have your heart pulled by her natural, raw emoting of grief. The narrative jumps again into becoming the all American road movie, Rizwan travelling across the epic barren landscape of the US in a quest to meet the President. In a first for Indian cinema, the film contains not one but two American presidents, as Barack Obama and George W. Bush lookalikes both make an appearance. The second half of the film suffers from the curse of Bollywood, in that a potential cinematic work of genius developing before the interval, is let down by a number of scenes that drag in comparison. Also, you may have a problem with the extended separation of Rizwan and Mandira, which breaks up the pairing of SRK and Kajol – the latter missing in action for long segments of the second half.
Luckily, all is well by the end, as Rizwan comes through a battle of personal demons and social evils to be reunited with Mandira. Although, almost as if compensating for the hero’s lack of heroic behaviour in the first portion, Johar has Khan single handedly saving a hurricane ravaged town from impending doom. This I found all a bit Hollywood for my Bollywood sensibilities, and distracting from the major themes of the story – love, terrorism and Asperger’s syndrome. My Name is Khan develops into an epic film. It is not faultless by any stretch, but will have you emoting with cinematic euphoria one minute and pulling out your tissues in desperation the next.
My Name is Khan releases 12th February
Steven Baker is a Hindi film journalist and post graduate in Indian Cinema