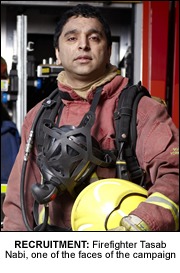 A BRITISH Asian firefighter from Sheffield is backing a major new drive to recruit more female and black and minority ethnic firefighters.
Tasab Nabi, a full time firefighter at Mansfield Road fire station, is backing South Yorkshire Fire & Rescue’s recruitment awareness campaign, which bids to make the organisation more representative of the communities it serves.
“Being a firefighter is a fantastic opportunity to make a difference to people’s lives and serve a public which really appreciates the work that you do,” Tasab said.
“Some British Asian families might not consider firefighting as a career as it is not traditionally associated with being an academic job, but there are plenty of opportunities for attaining training and qualifications along the way.
“Personally, I am really into my fitness so in that respect the job is ideal. But whilst you do need to be physically fit, the tests and selection process are not beyond reach. I would recommend anyone, whatever their background, gets in touch to find out more about a career in the fire service.”
Women are also being targeted in the awareness campaign, with females urged to come forward and find out more about firefighting as a career.
SYFR Director of Service Development Mark Shaw said: “Perceptions of the fire service as being a white male dominated organisation are changing and here in South Yorkshire we have already come a very long way, with female and BME firefighters on the front line at fire stations all over the county.”
Awareness sessions and recruitment days are being held throughout January and February to help clarify and dispel many of the preconceptions people from under-represented areas of the community might have about joining the fire service.