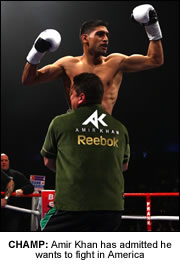 BOXER Amir Khan has firmly set his sights on conquering America following his stunning 90 second defeat of title challenger Dmitriy Salita.
The fight was Khan’s first title defence of his WBA light-welterweight title and the 22-year-old doesn’t look to be giving it up in a hurry.
A packed Metro Radio Arena saw the British champion land a flurry of pristine punches leaving New York-based Salita on the floor three times before the fight was waved off with just one minute and 16 seconds on the clock.
It was an explosive performance by Khan, and one he hopes will lead him to the bright lights of Las Vegas.
“It’s everyone’s dream to go over to Vegas. Hopefully we’ll shock the world when we go to America,” Khan said.
“Definitely, in the next year it would be a good move to go to the States to fight.”
With a training base already in America, Khan knows what to expect.
He even admits boxing fans in America are eager to see the British champ in action on their home turf.
“In the gym (in America) you get so many people asking ‘When are you fighting here?’ And I always say ‘Soon, soon’ but I think they are bored asking so they don’t ask me now.”
Frank Warren also admitted the bright lights of Vegas were already on the horizon for Khan.
“Amir will go and fight in the States, of course he will. What boxer doesn’t want to fight at Madison Square Gardenor in Las Vegas?, Warren said.
“He’s got the ambition to do that and prove himself over there. He will do that.”

In my own book, Online dating your partner We inform anyone who is using my personal recommendations that trying to draw in back

Up To 800 attended the Funeral of Abdullah Muhammed