Home Events An Immigration Debate with a Unique Creative Twist 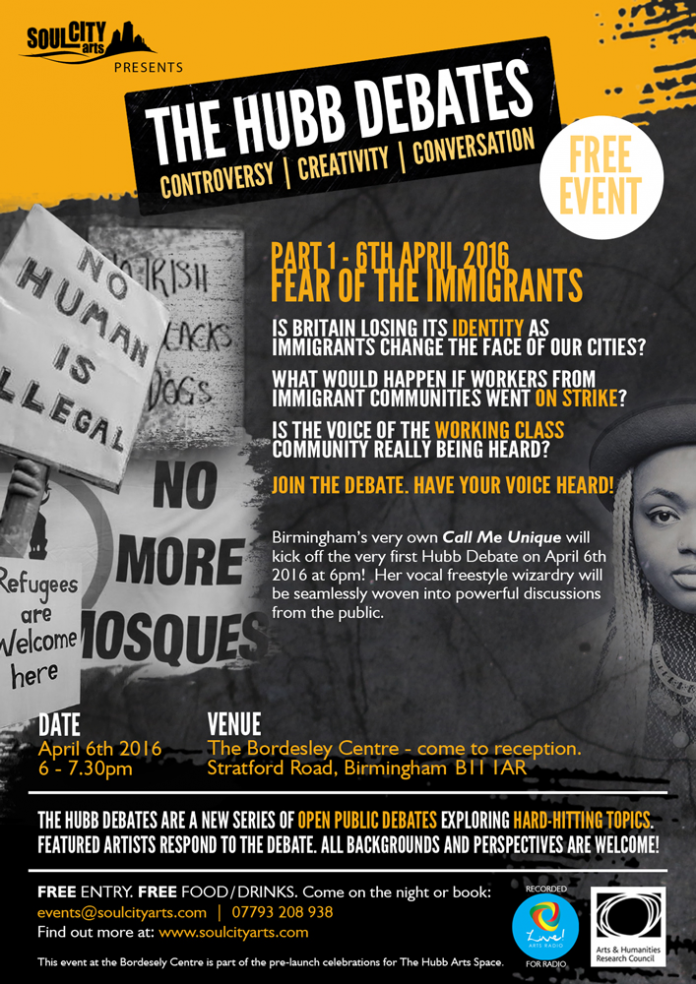 Taking place at 6pm, 6 April 2016, at the Bordesley Centre, the debate and interactive art-piece is intended to provoke in-depth conversation on one of contemporary Britain’s most divisive issues: immigration.

The event offers a unique take on the standard debate format – while audience members and invited experts discuss the topic-at-hand, performance artists and projected visuals respond to the mood and spur the conversation along new tangents.

Topics addressed on the night will include: Is Britain losing its identity as immigrants change the face of our cities? What would happen if workers from immigrant communities went on strike? Is Britain too full to take any more immigrants? Are immigrants a benefit to Britain?

Among the guest performers taking part in the event is local singer songwriter Call me Unique (who has previously supported Beyonce, Rihanna & Justin Timberlake), who will react to the discussion with improvised musical content.

This event, brought to life by Soul City Arts, whose director and founder is the Southbank Award-Winning Mural Artist, Mohammed Ali. Ahead of the event Ali said, “Often the voices most heard, belong to those who shout the loudest, or have the biggest platform. This must change. We are offering a platform to all, creating safe and neutral spaces for us to have difficult conversations and present them in extraordinary forms.”

The first in a series of such events sponsored by AHRC’s Cultural Exchange Scheme, ‘The Hubb Debates’ will explore hard-hitting topics and are open to artists and members of the public