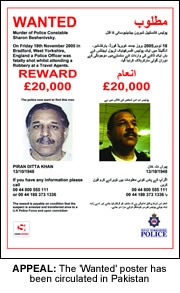 DETECTIVES hunting the last remaining suspect in the murder of PC Sharon Beshenivsky four years ago have made a direct appeal in Pakistan.
Fugitive Piran Ditta Khan fled the country following the botched robbery at Universal Travel Agents, Morley Street, Bradford on 18 November, 2005.

38-year-old PC Sharon Beshenivsky was shot and killed as she responded to reports of a robbery outside the travel agents.
Six people have already been convicted for their part in the robbery and murder.
Detectives believe there is a strong possibility Khan, 52, is in Pakistan.
Today, Crimestoppers took the unusual step of releasing wanted posters bearing Khans face in Pakistan.
The crime-fighting charity has also offered a £20,000 reward for information leading to Khan’s arrest and conviction.
“I am as committed now as I was in November 2005 to see this enquiry through to a conclusion. It is extremely important we trace Piran Ditta Khan and place him before the courts in Great Britain”, said Detective Superintendent Andy Brennan, the man who has led the enquiry throughout.

“I am appealing directly to people in Pakistan – if you know, or suspect you know, where Piran Ditta Khan might be, please tell us.”