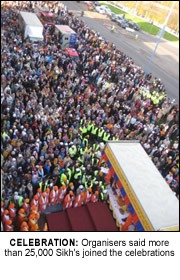 REJOICING Sikh’s celebrated on the streets of Sandwell this weekend to mark the 540th birthday of their founder, Guru Nanak Dev Ji.
Organisers estimated more than 25,000 Sikh’s from Sandwell, West Bromwich, Oldbury and Smethwick joined in the festivities which are celebrated each year.
A colourful procession – called a Nagar Kirtan – took the crowd to each of Sandwell’s seven Gurdwara’s who jointly organised the event.
The procession was led by a decorated float which held the Sikh Holy Scriptures, the Sri Guru Granth Sahib Ji.
Crowds were also treated to confetti showers, fireworks, music and hymns and Gatka martial arts performers along the way.
Malkit Singh, Event Organiser and President of Guru Har Rai Gurdwara, said the event was a huge success.
“I am delighted that the Nagar Kirtan was a huge success.  The whole day went off without any problems and in line with our plans,” he said.
“I had been concerned about the bad weather we had been having over the last few days but even the weather was just right.  We had many more people attending than we thought we would and everybody thoroughly enjoyed it.”
He added the celebration of the birth anniversary of Guru Nanak Dev Ji was an important date in the Sikh calendar and would have been celebrated across the world.
“Guru Nanak Dev Ji is the founder of the Sikh religion and his birth anniversary is a very important date in the Sikh calendar,” he said.
“Sikhs have celebrated this anniversary all over the world and in Sandwell, all of the Sikh community came together to take part in these festivities.  For Sikhs, this is a celebration of Guru Nanak Dev Ji’s teachings as well as his birthday.”
Plans are underway already for the event next year.