The Grewal’s star in Channel 4’s ‘The Family’ 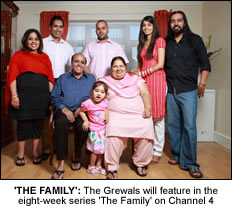 THE Grewal family from Windsor will make broadcasting history tonight when they become the first British-Asian family to feature in a fly-on-the-wall documentary on Channel 4.
The nine family members – one of whom is born during the series – will feature as part of the channel’s Bafta nominated ‘The Family’ series.
The eight-week series will not only include the birth of a new family member, but also a lavish Indian wedding.
Simon Dickson, Deputy Head of Documentaries at Channel 4, described the Grewals as “wonderfully warm.”
“Following the success of last year’s series, we are lucky to have found another brilliant family through whose eyes we can experience the highs and lows of family life,” he said.
“The Grewals are close knit and wonderfully warm – I know viewers are going to take them to their hearts over the coming weeks.”
Director David Clews added: “Making “The Family” has been an incredible experience. I think the films capture both the big issues and the intimate moments of family life and I hope everyone will enjoy spending time with the Grewals in the same way I have.”
So who are the Grewals? Click here to find out!