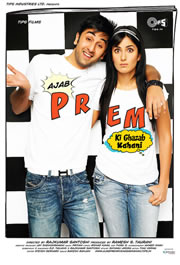 Cast: Ranbir Kapoor, Katrina Kaif, Upen Patel, Darshan Jariwala, Asrani, Smita Jaykar
Prem’s (Ranbir Kapoor) beliefs in life have always been very simple – be happy, make others happy and keep the whole town happy.
But Prem’s philosophy usually results in disastrous consequences for his family members and other residents living nearby.
For example, it was only a case of mistaken identity that led Prem to kidnap Jenny (Katrina Kaif). And it was sheer greed that made Prem pull a fast one over her father.
As for sweet and simple Jenny, she was brought up by indifferent and uncaring foster parents. So all she longed for was to love and be loved. And it was love and only love for Jenny that made Prem turn over a new leaf.
This made Prem turn into a hard working citizen. He becomes a mature and responsible human being by placing Jenny’s happiness above everything else in this comedy flick.
Bachna Ae Haseeno Ranbir Kapoor and Singh Is Kinng Katrina Kaif star in lead roles in this light hearted love story full of humour.
Director Raj Kumar Santoshi takes on the comedy genre with this flick after serious dramas like Halla Bol (2008), Khakee (2004), Lajja (2001) and many more.
The movie is eagerly awaited by Rabir and Katrina fans in the UK and should expect a bumping opening due to its lighted theme.