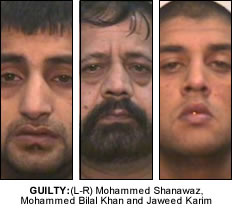 FIVE Oldham men who stole thousands of blank passports and visas from a courier van have been jailed.
Alan Burke, 49, Mohammed Shanawaz, 24, Jawad Karim, 19, Mohammed Bilal Khan, 53, and Mohammed Fiaz, 34, were sentenced for their part in the theft last year.
On 28 July last year 3600 passports and over eight thousand visas were stolen from a courier van, which had been parked outside a newsagent in Chadderton, Oldham.

The visas and passports were on their way to RAF Northolt where they would have been sent to British Embassies worldwide.
Burke, who was a passenger in the van, gave the group inside information allowing them to ambush the van when its driver parked up and went into a nearby newsagents.
Burke pleaded guilty to conspiracy to steal at an earlier hearing and was given four and a half years in prison.
At Manchester Crown Court the remaining gang members were jailed.
Shanawaz was sentenced to three years, Karim was given 21 months detention in a young offender’s institute, Khan was jailed to five and a half years, and Fiaz was sentenced to three and a half years.

The court was told suspicion immediately fell on Burke who had told police he had been ambushed and the passports and visas stolen whilst he waited for the driver to return to the van.
He was immediately arrested by detectives and an investigation involving the Serious Organised Crime Agency and Greater Manchester Police’s Serious Crime Division was launched.
The investigation resulted in a number of arrests and in January this year a car was stopped on the M62 near Oldham. Karim and Shanawaz were in the car with nearly 1500 visas and 1600 passports.

A number of searches were carried out and another 600 passports were found.
Detectives are still searching for the missing passports and visas.
Detective Chief Inspector Pete Marsh of GMP’s Major Incident Team said: “These men who are alleged to be part of an organised crime group made mistakes executing the robbery, which clearly implicated Burke.

“This was an extremely serious crime and a great deal of work has gone into finding the people responsible. The implications of these documents being available for use by criminals both in the UK and abroad meant this gang had to be caught quickly and a team with investigators from many agencies working together has achieved this.

“Everyone involved in this operation has worked incredibly hard and today signals a success for the team, although it is not the end as there are still a number of documents outstanding and the investigation is still ongoing.”