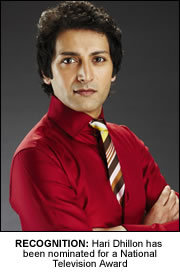 THE National Television Awards are back for another year and its good news for Holby City actor Hari Dhillon.
Since arriving on the show in November 2007 as dishy doc Michael Spence, the actor has become an integral part of the popular hospital drama, as well as acquiring an army of female fans in the process.
Next January the actor will compete with a host of popular names in the National Television Awards after being nominated in the Best Drama Performance. Hari took time out to speak to Zeenat Moosa…
Hari you’ve been nominated for a National Television Award in the Best Drama Performance category. How does that feel?
If feels great! As you know I am originally from America so it is really nice to know that the nominations have been opened out. It is always nice to know that you have had a pat on the back so to speak. It’s much better than people saying that I stink at what I do!
You’ve been in Holby City since 2007; you’re obviously enjoying your time on the show?
Oh yes. I came from Los Angeles for this role and didn’t know what to expect and I must say that I was more than surprised at the cast, crew, their way of work and the time taken to plan. It’s been wonderful.
You played a different character on the show as first, as Sunil Gupta didn’t you?
Yes that’s right. It was straight after I had finished drama school. I think I was only in it for like 6 episodes.
Your character Michael Spence wasn’t originally written as an Asian doctor was he?
Originally Michael was supposed to be an English public school boy. But then one of the writers thought to make him an Asian but changed the name, giving him an Indian / Christian background. There are almost 1 billion Indians in the world and some are Christians. This is what is great about Holby City – the writers and producers leave no corners untouched.
Michael is an interesting character and colourful. What are the similarities and differences?
Well I’m much smarter and funnier than him! There are some similarities that can’t be helped like for example how Michael talks before he thinks. Sometimes I start talking and then my brain begins to engage later. But he is much more colourful and morally devious, which I don’t think I am – although I think it can be a blessing to be able to go through life like him.
How did you get into acting?
Very much by accident. I went to drama school in 1994. Before that I attended Berkley where I graduated early and was then willing to try my hands at anything. After graduation, I was an AIDS educator in California and Hawaii working in prisons. I then helped a friend set up a theatre company in San Francisco which I really enjoyed. And then I came to England, attended drama school and fell into it!
What’s the main highlight of your career so far?
Oh boy! This is one of them. To be able to work on a high calibre drama like Holby and this Nomination too. I feel that I have been welcomed here, by all communities. The Indian community, the acting community and the Holby community.
Being American, do you think it is easier to be a British Asian actor or an American Asian actor?
I feel that the States are well behind. There, it is impossible to be an Asian actor for any other reason that because you are Asian. It’s the idea that you’re only there because you are Asian. For example; I have an Asian friend who has a regular acting role playing a character called Jim Smith – the fact that he is Asian is irrelevant. I think both the UK and America has a long way to go – there are very few exceptions but on the whole it is the same old cliché. I always joke that if the character of Michael Spence was on Greys Anatomy, he would have a turban and jewel and arrive on a flying carpet. Americans would probably really play up the Asian character.
Any juicy story lines you can tell us?
Well in a few episodes, my character will, for the first time, speak to a patient in Punjabi. I think about 80% of his speech will be in Punjabi. Although it’s taken two years from when the character first arrived on screen I think it is a credit to Holby to be able to push these boundaries.
And are you fluent in Punjabi?
Not at all. Although I did live in India when I was about 6 years for 9 months, I grew up mainly in San Francisco where there was a very small Asian community. Actually I think the first Indian friend I made was in High School, other than cousins and siblings. I didn’t have any actual Punjabi schooling – all the Punjabi I do know is from my parents who were very nervous that we would lose our mother tongue living in America so took us to India regularly. I travel to India with my child now, at least once a year.
Would you ever want to move back to America?
I haven’t really thought about going back – I am enjoying it so much over here. I would like to do some television or film in America but at some point in my life I would like to move to India. My personal goal would be able to love and work in India for 2 to 3 years.
You can catch Hari in Holby City on BBC One every Tuesday at 8pm
Voting for the National Television Awards is open until September 30
Log onto the National Television Awards to register your vote!