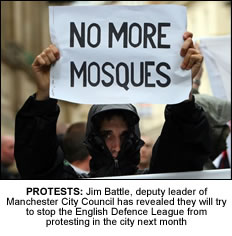 MANCHESTER is taking a stand against an anti-Islam protest group by calling on the Home Secretary to prevent their planned protest in the city centre next month.
The English Defence League is expected to descend on Manchester on 10 October for a planned protest against Islamic extremism.
The group has already caused havoc in Birmingham during protests in the city earlier this month and in August.
On both occasions the group clashed with anti-fascist supporters who fought running battles in the middle of Birmingham city centre.
Manchester City Council, faith groups and city centre traders have joined together to make their request to the Home Secretary.
Councillor Jim Battle, deputy leader of Manchester City Council, accused the group of not having a “legitimate cause”, adding their only aim was to “vilify, insult, intimidate and provoke” the city’s Muslim community.
“Manchester has a long and rich tradition of protest and radicalism. We are incredibly proud of that history and to this day people regularly make their voice heard in demonstrations in the city,” he said.
“But we are also a welcoming and tolerant city. Wherever the so-called English Defence League has gone there has been violence and disruption to ordinary people who just want to go about their business.
“These people do not have a legitimate cause – they merely wish to vilify, insult, intimidate and provoke one section of our community. That isn’t protest or legitimate democratic debate and it certainly is not welcome in Manchester.”
He added the city council were not a “lone voice” in making the request, with faith groups and city centre traders eager for the Home Secretary to act.
“Manchester does not want the EDL, and we stand united against their poisonous, disruptive and un-British outlook and actions,” he added.
The Dean of Manchester, The Very Revd Rogers Govender also voiced his concerns against the planned protest saying he stood in “solidarity” with those who oppose the EDL’s “agenda of division”.
Related Articles
Far-right groups ‘provoking’ Muslim communities