Home Sports ‘I don’t want to be captain’, admits Sehwag 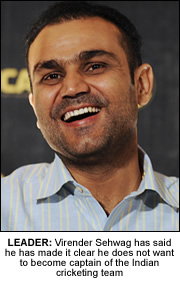 INDIAN batsman Virender Sehwag has shot down the possibility of leading his team as captain.
The 30-year-old told an Indian news channel he had no intention of replacing current captain Mahendra Singh Dhoni.
He suggested the Indian cricket board should instead pick a vice-captain who can be groomed to take over the reins after captain Dhoni.
“I don’t want to be a captain, I have already told selectors about it. I have said that a new player should be made vice-captain and be groomed to be a captain,” Sehwag told Indian news channel News24. “I want that I should continue to score runs and keep winning matches for the team.”
Sehwag has had two spells as vice captain – the first in October 2005 when Rahul Dravid replaced Sourav Ganguly as captain, and a second spell earlier this year in the lead-up to the World T20 tournament.
While both spells ended abruptly due to loss of form and injury, Sehwag is convinced he does not want to take Indian cricketing hot seat.
The one thing he is sure about is who ranks in his heart as the greatest player to ever lead India.
“Sourav Ganguly has been the best captain India ever had,” Sehwag said. “Sourav took over as captain of the India cricket team when it was going through a very bad patch. The Indian team was struggling to put come out of the match-fixing scandal. He had a responsibility to put together a new team and he did a splendid job.”

It’s a big web site with numerous subject areas then tons of threads in each subject.

Whenever we are a lot more youthful, we were in a position to rise...