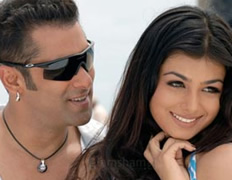 FILM: Wanted
DIRECTOR: Prabhu Deva
CAST: Salman Khan,Vinod Khanna, Ayesha Takia, Prakash Raj, Om Puri, Mahesh Manjrekar
Radhe (Salman Khan) works for the Mumbai based mafias but with a difference. He is a fearless trained street fighter and shooter. He is a man who can keep his cool, in the most deadly situations. Rebellious by nature, Radhe loves to defy authority with his great leadership skills.
He works on his own terms for sharp minded Alibhai (Prakash Raj), the most dreaded mafia around. Alibhai is based overseas but comes to India whenever the need arises. Feared by friends and foes, Alibhai is the worst enemy anyone could wish for.
Radhe is in love with Jhanvi (Ayesha Takia) with whom he shares a strange love hate relationship. Jhanvi tries to convince him to leave the crime world.
But although Radhe loves her, he is too much of a hardcore criminal to adhere to her wishes.
With time, Radhe moves onwards and upwards in the criminal world single handed by eliminating Alibhai’s enemies with his wit, grit and fearless strategy.
But time soon comes when Alibhai, whom Radhe has never seen, arrives in India specially to meet him. Alibhai offers Radhe an assignment. But Radhe initially refuses point blank making Alibhai his biggest enemy.
Soon, a twist changing the very premise on which the story is based, makes Radhe wanted dead by the mafia and alive by the law in this Bollywood drama.
Bonny Kapoor teams up with Salman Khan once again after their previous UK box office hit, No Entry (2005).
Wanted is an ambitious project said to be a remake of the Telegu film, Pokiri. Renowned choreographer/actor, Prabhu Deva makes his directorial debut for this Hindi feature.
The film has been shot on locations of Greece, Bangkok, Chennai, Hyderabad and Mumbai.
With No Entry having done so well in UK cinemas, expectations are running high for Wanted especially seeing Salman Khan in the lead role.