‘IPL has made us winners’, says Captain Dhoni 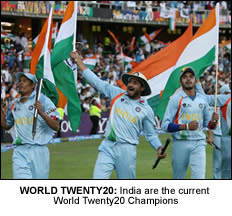 INDIA enter the World Twenty20 this month hoping the benefits of playing regularly in the Indian Premier League can help them retain their crown as the best Twenty20 side in the world.
The holders, who beat Pakistan to win the inaugural event in South Africa two years ago, arrive in England as most people’s favourites to secure a second successive triumph.
Their line-up includes some of the most destructive batsmen in the world, including captain Mahendra Singh Dhoni, Yuvraj Singh, Virender Sehwag and Yusuf Pathan, while in Harbhajan Singh and Zaheer Khan they have two of the best bowlers in the tournament.
But it is their vast experience of high-level Twenty20 cricket which may tip the odds in their favour with every IPL team forced to play at least seven Indian players – guaranteeing them greater experience of the format.
“It will help us, but not only us because there were quite a few players from other countries playing in it,” said captain Dhoni.
“We should get more help from it because more of our players were playing in the IPL.
“The best thing it has done for us is that it has taught the youngsters how to handle pressure. In international cricket it’s all about how you handle that pressure and how you react to a situation.
“You might need 10 off the last over and how you react to that is important. Everyone has been in that situation by playing in the IPL. That really helps and that experience really counts.
“The IPL is ideal for the youngsters to gain that experience and it’s great exposure for guys who are not playing regular international cricket.
“They get to face really fast bowling like Brett Lee or experienced spinners like Shane Warne or Muttiah Muralitharan, so it’s a very good exposure for them.”
India also have the advantage of a fairly settled line-up with the majority of their side playing in all three formats, although Sachin Tendulkar was not chosen for this tournament after opting out of the previous event.
It has allowed them to develop under the guidance of Dhoni and coach Gary Kirsten and improve into one of the most electric sides in the world in all three forms of the game.
“Almost all the side have played 80 to 90 one-day internationals and have played around 40 Twenty20 games if you include the IPL and that really helps,” said Dhoni.
“They come up with ideas and that helps me personally. If you have 50 ideas you can pick and choose according to the situation.
“We have made a lot of improvement in our fielding, our catching and run-outs and we have to keep on improving. We have raised the bar, but there is always scope for improvement.”
India’s consistency in all forms of the game has been particularly impressive given the huge expectations on them placed by a cricket-obsessive nation, who expect nothing less than another triumph in the June 21 final at Lord’s.
But Dhoni is refusing to be intimidated by the pressure on his side, stressing: “We’re not really worried about that. Expectation levels are not set by us. We don’t want to go by expectation levels that are set by others.
“We’re not going to sit down and think what will happen if we don’t win the cup. It just adds excess baggage and it really can hamper performance.
“We’re not thinking about what may happen; we’re only thinking about what we can do and what we should achieve in this tournament. We want to play aggressive cricket and enjoy it.”

popular BBC television series MasterChef is relocating to Birmingham has been hailed as a...