Decision not to prosecute torturers is ‘disappointing’, says Moazzam Begg 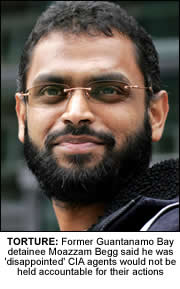 FORMER Guantanamo Bay detainee Moazzam Begg has said he is “disappointed” at news CIA agents will not be prosecuted over the use of illegal interrogation tactics used under the Bush administration.
The White House published details of the tactics now banned under President Obama.
The memo’s, describing interrogation tactics including waterboarding and sleep depravation, were released following a Freedom of Information Act lawsuit by the American Civil Liberties Union.
Birmingham-born Begg was one of nine British Muslims who were held at Guantanamo Bay under the Bush administration.
He was released in January 2005 without charge after which he said he had been tortured during his three year detention.
Now a spokesperson for human rights group Cageprisoners, Begg said he welcomed the move to publish the secret memos but was disappointed legal action would not be taken against CIA agents.
“The decision not to prosecute torturers is not only disappointing but it is the projection of illegality which most people would have thought the US administration would have recognised,” he said.
“The lessons from Nuremberg clearly have not been applied and, whilst the belated admission that the previous US administration sanctioned and practiced torture is welcome, prosecuting those responsible is an international obligation that remains unfulfilled,” he added.
Begg’s views were also shared by Amnesty international who accused President Obama of giving those responsible a “get-out-of-jail-free card”.
Amnesty International UK Campaigns Director Tim Hancock said: “With this statement, the US Department of Justice appears to have offered a ‘get-out-of-jail-free card’ to people involved in torture.
“Torture is never acceptable and those who conduct it should not escape justice. It is banned under international and US domestic laws, but those laws are only meaningful if they are enforced.”
He welcomed the release of the memos but said it was “wrong” to “[Brush] torture and rendition under the carpet” by not holding those responsible accountable for their illegal actions.
“The facts should be brought out into the open through an independent commission of inquiry. Those who have broken the law – no matter what rank they hold – should be prosecuted under the law,” Mr Hancock added.