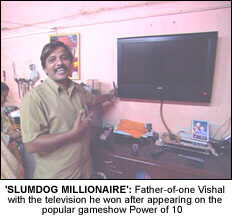 IT’S the quintessential modern-day fairytale of every young boy’s dream. A rags to riches story of a child born into poverty whose life is transformed to bigger, better things, away from the stench and disease of the Mumbai slums.
That’s the premise behind the award-winning British film ‘Slumdog Millionaire’ – a film which having picked up almost every award in sight now looks to next week’s Oscar’s with renewed optimism.
But for some optimism is the stuff of dreams. For those living in the reality that is the Mumbai slums, the Oscar’s bear little reward for a life spent living on handouts.
To millions of slum dwellers in India, there’s a familiar theme – getting ahead, getting out and getting rich.
In Mumbai and Delhi the number of street beggar kids and the families that survive on handouts now exceeds the entire population of Great Britain.
Lawless, without access to education, and hopeless, the children born to the poorest communities in the world are destined to live under tin roofs in areas lined by shacks packed so tightly they are accessible only by walking in single file past oozing sewers.
But the story of the ‘kid done good’ isn’t just a Hollywood script.
In a documentary to be screened on Sky1 next week, the tales of real-life ‘Slumdog millionaires’ provides a fascinating insight into aspirational and entrepreneurial slum-dwelling kids, who have triumphed through luck or hard work.
Documentary makers immerse themselves in the world of Dharavi, a bustling shanty town on the edge of Mumbai.
Here they find Vishal, an auto rickshaw driver who won the game show, Power of 10.
To this day the father-of-one still doesn’t know who put him up for the gameshow that transformed his life.
He managed to beat an IT engineer and answered question after question correctly and like Slumdog Millionaire’s Malik, Vishal kept interposing his life’s hardships with every question that was posed to him. As the prize money kept increasing, he kept thinking of how many financial troubles he was able to tick off his list.
He currently lives in a one-room apartment with his mother, wife and eight-year-old son, and although his prize money has all gone, he does have a fish tank, an LCD TV, a fridge, a washing machine and a microwave. Possessions that seem second-to-none to many in the Western world, for Vishal there’s no comparison. “I’ve achieved all my dreams”, he tells documentary makers.
But unlike Vishal who changed his fortunes himself, there are organisations who try and give the ‘Slumdog’ generation a kick-start to a better life.
The Yuva Parivartan, a project kick-started by the Kherwadi Social Welfare Association, provides hope for the hopeless.
Working with the motto “Making the Unemployable Employable”, the scheme has changed the lives of the Slumdog generation, offering vocational and educational opportunities, as well as psychological support.
The kids who got out include Preema, the seventh child to struggling parents, who was rag-picking at the age of six, feeding herself on leftover scraps from street bins. Accepting help from the Yuva Parivartan, Preema is now attending university in Mumbai. Another uplifting story is that of Rahul, a former petty thief who took advantage of unsuspecting tourists and went on to become an engineer and mentor for the Yuva Parivartan.
Andrew O’Connell, Sky Factual’s Commissioning Editor, said the success of Danny Boyle’s Slumdog Millionaire made the stories from Mumbai’s slums ever more poignant.
“Everyone knows the story of Jamal, ‘The Slumdog Millionaire’ but what is life like for the REAL slumdogs? We wanted to explore this fascinating underworld and meet the interesting characters who have turned their lives around in a similar way to Jamal,” he said.
The Real Life Slumdog Millionaires, Monday 23 February 22.00, Sky1 and Sky1 HD