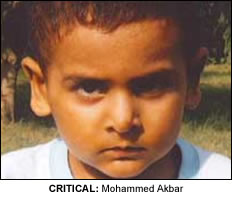 A FIVE-year-old boy is in a serious condition in hospital after he was hit by a truck outside his school in Lancashire.
Mohammed Akbar was crossing Union Road in Oswaldtwistle yesterday when he was hit by a Ford Transit flatbed tipper.
The accident happened outside St Paul’s Primary School, where Mohammed is a pupil, and he was taken to Royal Blackburn Hospital.
However, his condition deteriorated and he was transferred to Pendlebury Children’s Hospital overnight.
He has suffered a broken leg, fractured skull and has bleeding on the brain.
Doctors have described his condition as ‘critical’.
Police are now appealing for information and in particular want to speak to the driver of a grey Isuzu pickup truck which was travelling past St Paul’s Primary School.
Sergeant Pete Sculpher, who is leading that investigation, said: “I am really keen to speak to the driver of the grey Isuzu pickup as I believe they could be a crucial witness in this investigation.
“I would like to make it clear that I do not believe they were involved in the collision in any way, but they may well have witnessed the events leading up to it.
“I would also continue to appeal to anybody else who may have witnessed the collision to contact police immediately.”
Anyone with any information should contact police on 01254 51212 or call Crimestoppers anonymously on 0800 555 111.