Suffering of two-year-old girl who had 107 injuries 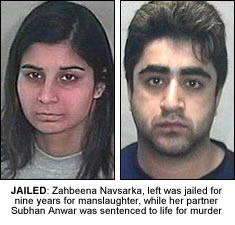 A COUPLE have today been jailed for a total of 23 years following the horrific death of a defenceless toddler.
Two-year-old Sanam Navsarka was subjected to horrendous abuse in the weeks leading up to her death in May last year.
Today Subhan Anwar, 21, was jailed for life after being found guilty of Sanam’s murder at Bradford Crown Court. He was told he would have to serve a minimum of 23 years.
His partner, and Sanam’s mother, Zahbeena Navsarka, was found guilty of manslaughter and jailed for nine years. Both had denied charges of murder.
During the trial Bradford Crown Court heard how the pair had inflicted 107 injuries to Sanam’s chest, face, arms and legs.
The court was told that the youngster in the months before her death had probably been beaten with a metal pole which had broken her left leg and also had Anwar’s Ben Sherman aftershave sprayed on open sores on her bottom – leaving her in agony.
During the four weeks the youngster was not once taken to see a doctor despite being in obvious distress, the court was told.
It was also revealed Sanam was frequently locked in a dark cupboard as punishment.
The youngsters smeared bloody handprints were found in the cupboard after she died.
Prosecutor Julian Goose QC told how the “cool and callous” couple had gone to the doctors themselves for a health check-up on the day that Sanam died – leaving the toddler who would have been in great distress on her own for nearly two hours.
When they came home they had then gone to bed to watch a DVD.
Hours later the couple claim Sanam stopped breathing after they left her alone in the bath for 10 minutes and returned to find her underwater. 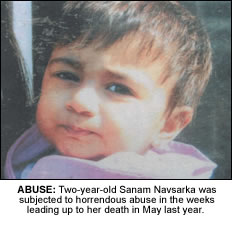 However a post-mortem ruled out drowning as a cause of death.
Police interviews read in court showed how both Navsarka and Anwar blamed each other for Sanam’s injuries when arrested by police in May last year.
Anwar admitted slapping the youngsters face but denied causing the 107 injuries.
Navsarka meanwhile accused Anwar of being too harsh on her daughter adding he stopped her from taking Sanam to see a doctor.
Following the convictions, Detective Superintendent Andy Brennan said they would have to live with Sanam’s death for the rest of their lives.
“Sanam was a beautiful and lively child who had her life tragically cut short by her mother Zahbeena and her partner Subhan Anwar,” he said.

“Sanam suffered horrific injuries which have been catalogued throughout the trial. In an attempt to avoid their responsibility for Sanam’s injuries, Zahbeena and Subhan denied Sanam the medical treatment that she desperately needed which could have ultimately saved her life.


“Both Zahbeena and Subhan will now have to live with Sanam’s brutal death for the rest of their lives.”