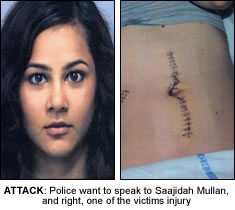 DETECTIVES investigating the stabbing of three women in Leicester last August have released a picture of a woman they are seeking over the incident.
One woman aged 45 and two aged 20, received puncture wounds in the assault which took place just before midnight on 29 August in Belvoir Street, Leicester.
Three women aged 22 and another aged 23 have been arrested in connection with the incident and released on police bail pending further enquiries.
Since the incident officers have been trying to trace 19-year-old Saajidah Mullan, from Braunstone, but investigations so far suggest Mullan may left the country around the end of August.
But police believe she may be back in the city and have released her photograph in the hope that someone might recognise her.
Detective Inspector Andy Allden, who is leading the investigation, said: “We believe that Saajidah left the country in late August, early September but are looking into the possibility that she has been back to Leicester to see family and friends for Christmas and New Year.
“We know she has links with the Braunstone and Highfields areas of the city and would ask members of the public to take a look at this picture.”
Anyone with information can contact Crimstoppers on 0800 555 111.