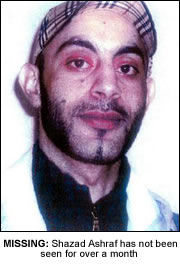 POLICE are growing increasingly concerned for the welfare of a 32-year-old man who has been missing from his home in Handsworth, Birmingham for over a month.
Shazad Ashraf was last seen at around 5.30pm on December 10 by a relative who gave him a lift to a bus stop on Stratford Road.
Police said Mr Ashraf was believed to have been making his way to his home address on Ashwin Road.

A family member later spoke with Shazad on December 14, but family and friends have not seen or heard from him since.

Mr Ashraf is described as Asian, 6ft tall, of slim build, with short black shaven hair, an Asian accent, and he was last seen wearing a black zip up jacket, light blue jeans, and dark shoes or trainers. He has a tattoo in the form of text or writing on his forearm.

Officers investigating his disappearance are growing concerned for his wellbeing and appeal for anyone with information relating to his whereabouts to contact Thornhill Road police station on 0845 113 5000.