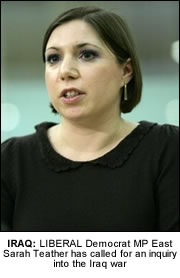 LIBERAL Democrat MP East Sarah Teather is calling for a full inquiry into the Iraq war after the Prime Minister announced that troops would be withdrawn by July next year.
Ms Teather, MP for Brent East, has been a vigorous campaigner against Labour’s invasion of Iraq, and in 2003 marched alongside 2 million others to protest against military action.
Gordon Brown yesterday confirmed British troops would leave Iraq next year, but downplayed calls for an inquiry into the invasion saying “we are not in that position at the moment”.
He said calls for an inquiry would only be discussed once UK troops had left Iraq.
A briefing published by the Liberal Democrats today into the Iraq war laid bare the full extent to which the invasion has impacted on Britain.
178 British Armed Forced personnel and 98,133 Iraqi civilians have lost their lives in the conflict, the report stated. 4.7 million Iraqis were forced to leave their homes with nearly 1,000 applying got asylum in the UK.
The report also stated that £7.8 million of taxpayer’s money has so far been spent on military operations in Iraq.
“The news that British troops are being withdrawn from Iraq is to be welcomed, and will be a huge relief to the family and friends of the men and women that were sent there by our Government,” Ms Teather said.
“The people of Britain and Iraq will never forget the fateful day when hundreds of Labour MPs walked through the voting lobby and condemned tens of thousands of innocent Iraqi civilians to their deaths.  This was an illegal and immoral war, cooked up by a Labour Government determined to stand alongside George Bush, whatever the devastating consequences.
“Gordon Brown and his party have wreaked unspeakable tragedies on many innocent British and Iraqi families. For the sake of all those who have lost their lives there must be a public inquiry into how this country and its servicemen were taken to war based on tenuous evidence and unsound legal judgments.
“I remain as angry about Iraq as I was on the day when millions of us marched to try and persuade the Labour Government to change their minds. I am proud that the Liberal Democrats are the only party to have consistently spoken out against the invasion and I will continue to push for a full public inquiry to make sure that such horrific actions can never happen again.”