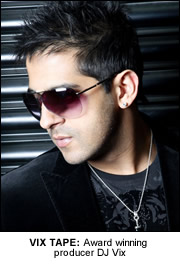 As Romeo goes with Juliet and Adam with Eve, DJ Vix is the perfect pairing to entertainment as his musical compositions have created a number of chart breaking sounds that have echoed around the globe and have got the dance floors pumping.
As a youngster, London-raised Vix always had a passion for music and would regularly watch his older brother behind the deck. With a brotherly icon to look up to Vix took his brothers hobby and made it into a career of his own. This was the young stars ignition to start up a music road show – Dhol n Bass in 1996, which today stands as one of the most sought after roads shows across the shores.
Dhol n Bass was to be the foundations of DJ Vix’s success. Through his roadshow Vix was given a window of opportunity to see what worked on the dance floors and incorporated this into a trilogy of chart topping albums that he produced alongside his travels – Dhol n Bass, Vix It Up and Identical To None.
Now DJ Vix has re-entered the music charts with his latest album Vix Tape which has erupted the Bhangra industry with each track oozing class, creativity and originality. With the release of such an explosive album the future looks bright for the DJ who promises ‘this is just the beginning…..’
For those of our readers who don’t know you introduce yourself?
I’m an award winning DJ and a producer. I have been in this industry for a while now and I have just released my 4th album Vix tape which is in stores now.  I am very passionate about music; I live and breathe it which you will hopefully be able to feel through my music.
You’ve been in the business now for many years now. What has been you highlight?
Yeah I have been in the industry for a long time and I have been blessed in having a number of successes which have been down too sheer hard work and dedication which goes on not just behind the decks but in the studio too. I would have to say one of my best highlights would have to be winning the best Newcomer award back in 1992 when things were starting to get into motion. That set me up for a number of things and opened many doors which have been amazing.
From these successes I later went on to win The Best UK DJ award from Choice FM in 2002 which was a great year for me as I also got to sign for Moviebox, which was a great career highlight.
Did you have a lot of support from your family/Friends to pursue your music ambitions?
I had a great deal of support from my family and friends which has been great. My brother was a DJ and I got a lot of direction and support from him in particular and my parents have been behind me every step of the way. I have always been level headed when entering this industry as it can be quite turbulent which my parents agreed. Therefore I made sure I had something to fall back on if things didn’t go as planned and I went to Uni and graduated with a Computing Degree.
What was the inspiration behind your new album ‘Vix Tape’?
My greatest inspiration behind the album has been from Shin from DCS who features heavily in the album. He is just a musical mastermind and really knows his stuff. We both work really well together as we are constantly bouncing ideas of each other that really work which can hopefully be heard in the album. Also I wanted to do something different too with the album as I am a firm believer like Shin in stepping outside the box which is why the album is half my tracks and the second half is a mix tape.
You mentioned Shin was great to work with why was that?
Well as I said before it was great to work with Shin as he has a mind fill of ideas that are each original and he really knows what works as he has been in this industry for a long long time. It was good to work with him as the rest of the artists that I worked with on the album were based internationally which made things a bit difficult at times. For example at times I had to play songs via my phone and hope they understood what I wanted from them, so it was a longer process but it was still great working with each of them. But with Shin as he was just down the road in Birmingham it was a lot more smoother process.
Is there anyone else that you would have included in the album given the choice?
Well if I had the choice to work with anyone in the industry I would have to opt for Gurdass Mann as I have always looked up to him since I was a kid and I still do. He just keeps getting better and better. He is in a league of his own as he constantly comes out with hit after hit with each one different from the last. He a true musician and to work with him would be an absolute honour and delight.
What’s next for DJ Vix?
Well that’s tough as there is so much that I have planned. Obviously it all involves playing and making music but the main thing on the cards is making my next album which I am planning to do alongside the Safri Boys who like Shin are artists that I have real admiration for. With this in mind I am confident that we will make good music together so watch this space.
DJ Vix – Vix Tape is out now!
Interview by Sunny Sahota