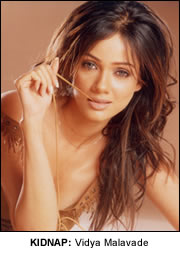 IF ever one man and one film kickstarted a Bollywood career, look no further than Shah Rukh Khan and Chak Dey India .The highly patriotic film was a smash at the box office and it launched the career of a little known actress called Vidya Malavade. Before her role as Vidya Sharma – goalkeeping and captain extraordinaire in Chak Dey India, Vidya’s acting career was non-existent. A role in the box office flop Inteha in 2003 was all that connected her to the biggest film machine in the world. Fast forward today and the actress has swapped Shah Rukh for Sanjay Dutt as she gears up for the release of her latest film Kidnap. We caught up with the actress to find out all we can about her latest film…
How did you land yourself a role in Kidnap?
Last year Sanjay Gadhvi called to wish me on my birthday and said that he had a part for me in Kidnap. He asked me if I was interested so I read the script, absolutely loved it and decided instantly that the role was mine. I think of Kidnap as a birthday gift.
Tell us a bit about the high of Chak Dey India
Wonderful to say the least! I just couldn’t believe the hysteria I mean we almost became youth icons. People still remember me as the Chak Dey captain in India and abroad. I am so proud of Chak Dey India! I will forever be indebted to Adi Chopra for giving me that opportunity.
You’ve worked with Shah Rukh Khan in Chak Dey India and now Sanjay Dutt in Kidnap. Tell us the difference.
That’s an unfair question! For me both are living legends and I still can’t believe at times that I got the chance to work with them both. To answer your question, Shah Rukh is very energetic and intense while Sanjay Dutt is very laid back and relaxed. They both made me extremely comfortable and never made me feel like a newcomer. I think of Shah Rukh as a tornado of energy & Sanjay as a gentle giant, because behind the deadly Dutt exterior is a gentle, adorable and nice human being!

How does it feel to be cast opposite him in Kidnap?
It was a fantastic role for me and Sanjay made it even more comfortable. Almost all my scenes are with Sanjay and it is our journey as an estranged couple finding their connection & love again through a demanding event in our lives. I totally enjoyed playing my part as Sanjay Dutt’s wife!

What is your opinion about Kidnap and who it will appeal to?
A good film appeals to everybody! It’s a sincere and entertaining edge-of-the-seat drama, which will have you glued!
From Inteha to Kidnap, how has the journey been?
It has been a long trying trip with a lot of struggle & I feel this is just the beginning… Things are looking up and I can’t give up. Miracles come unannounced! (Smiles)
Do you feel nervous about the release of Kidnap?
Yes very nervous! Fortunately I am not getting time to indulge in it otherwise I would drive myself nuts. Right now I’m off to Japan as the Cultural Ambassador of India and will return a day before the release so the jitters will not last for more than a day!!

Any amusing experience you can recount on the sets of Kidnap?

We were shooting during the night at Mumbai’s Madh Island and I had this intense craving for fresh prawns. I was talking to Sanjay about it when lo and behold his wife Manyata Dutt turns up on set with the most awesome prawn and mutton curry I have ever tasted. She was absolutely adorable!
Sanjay Dutt and you have an Adnan Sami song in Kidnap. Tell us about that?
Oh it is such a fun song called Haanji. It’s catchy & ‘hummable’ and is my only song in the film & obviously one of my personal favourites because I get to step into the fun mode for a bit.
What’s next after Kidnap?
There is Tum Milo Toh Sahi with Suniel Shetty, Nana Patekar and Dimple Kapadia…. then there is Chandan Arora’s Striker with Siddharth (Rang De Basanti). Thereafter, Tigmanshu Dhulia’s Kingcon with Govinda and a couple of other scripts that I like and look forward to doing.
Kidnap released in selected cinema’s across the UK this October