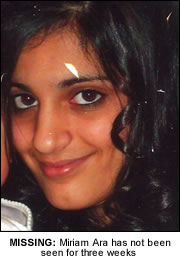 POLICE are appealing for information relating to the whereabouts of a 15-year-old girl who has been missing from her Birmingham home for more than three weeks.

Miriam Ara was last seen at her home address on Wake Green Road in Billesley on the morning of August 24. She said she was popping out for a short time, but failed to return home.

Due to her age, police are growing increasingly concerned for her welfare.

Miriam is described as Asian, around 5ft 7in tall, of slim build, with black shoulder length hair, with brown eyes and a Midland accent. She was last seen wearing navy blue jeans, black bomber jacket with a hood, a red top, white belt and red shoes.

Anyone with information regarding her whereabouts is urged to contact police at Kings Heath police station on 0845 113 5000.