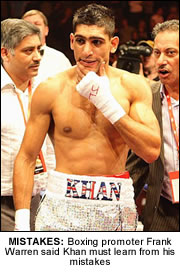 FRANK Warren has warned Amir Khan he must learn from his mistakes – or risk shattering his dream of becoming a world champion.
The boxing promoter delivered the damning verdict weeks after Khan tasted his first defeat as a professional boxer.
Khan suffered his first professional knock out at the hands of big hitter Breidis Prescott earlier this month.
The 21-year-old charged towards his Columbian opponent as the bell went but was sent crashing to the canvas with a series of punches just 54 seconds into the bout to leave a packed MEN Arena stunned.
Even before the defeat some questioned Khan’s defence after he was knocked down twice in previous bouts.
Writing on his website Warren said it was imperative for Khan to learn from his mistakes or risk never realising his dream of winning a world title.
“Amir doesn’t have to panic just yet but he must learn from his mistakes and that must now be his mission otherwise his dream of a world title will become a nightmare.”
Warren compared Khan to other great fighters – Frank Bruno, Nigel Benn and Alan Minter – who all experienced knockouts but went on to win world titles.
He also refused to be drawn into the debate about Khan’s ‘weak chin’ saying he believed the excitement of the crowd led Khan to make mistakes.
“For me the problem isn’t Khan’s chin, as he bounced albeit on shaky legs straight back up after the first knockdown and tried to get to his feet following the second,” Warren said.

”Instead it is his desire to please the fans and take unnecessary risks that let him down, and he neglected his defence, letting his heart rule his head.”
Khan will now return to the ring in December at the NEC in Birmingham and Warren believes his young star will bounce back.
“He’ll be back in action on December 6 when he has to show the fans what he has learned and try to set the record straight.”
Related Articles
Khan – ‘I’ll come back stronger’

US Shuts Down Pakistan’s Habib Bank Over Terror Link Concerns