Police appeal to public for help 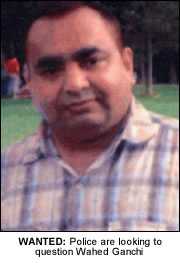 DETECTIVES investigating the rape of a girl have named a man they want to speak to in connection with the incident.
Wahed Ganchi also known as Wahed Shaikh, 40, from Leicester is described as Asian, of large build, around 5’6″ with short black hair.
A police investigation began on last month when the victim said that she had been raped sometime around the beginning of August at a house in the Leicester area.
Police believe Mr Ganchi knows they are looking for him.
Detective Sergeant Chris Baker said: “We are urgently appealing to the public to contact us with any information that could help us to trace Wahed Ganchi’s current whereabouts.
“We believe that Mr Ganchi is aware that we want to speak to him and knows that we have been actively trying to trace him.”
“I would appeal to anyone who sees him or knows where he is to contact us as soon as possible.  If you want to remain anonymous you can contact Crimestoppers on 0800 555 111.”
A man in his 30s was arrested on suspicion of perverting the course of justice and has been released on police bail pending further enquiries.
Anyone with any information is asked to contact Leicestershire Constabulary on (0116) 222 2222 and quote incident 984:20:08