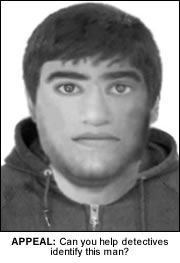 POLICE in Birmingham are making a new appeal for information about a serious sexual assault that occurred in the city a year ago.
One year on, an e-fit of the offender has been issued to try and jog people’s memories on the anniversary of the incident which occurred on the canal towpath near Anderton Road, Sparkhill on Sunday 16 September 2007.

The offender approached a lone 22-year-old woman who was walking along the towpath and assaulted her.

He is described as Asian, 15-20 years old, of chubby build and average height, with short black hair and some adolescent facial hair. He was wearing camouflage trousers and a hooded top.

Detective Inspector Tom Chisholm from Belgrave Road police station said: “As part of our ongoing investigations we are releasing this e-fit as we believe that a member of the public will have important information which will lead to the identification and arrest of the offender.

“The appearance of the man may well have changed in the past year but we are keen to speak to anyone who believes they may know his identity.

“This is an isolated incident and with the help of the public I am confident that we can mark the anniversary of the serious sexual assault by bringing the offender to justice.”