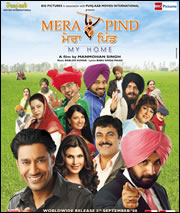 Directed by: Manmohan Singh
Cast: Harbhajan Mann, Navjot Singh Siddhu, Kimi Verma, Sarabjit Mangat, Deep Dhillon, Navneet Nishaan, Sheeba Bhakri, Rana Ranbir, Gurpreet Ghuggi and Darshan Aulakh
Navjot Singh Sidhu is a rich, fun-loving guy who grew up in the west. He has now returned to his homeland where he is happily settled in a small village in Punjab. The lives of the village youths, led by Harbhajan Mann, are transformed by Sidhu’s simple, enterprising initiatives.
As time goes by, the village is transformed into a sparkling hamlet that in fact becomes a model for nearby villages. Mera Pind (meaning my home) is a thought-provoking, Punjabi movie depicting the challenges and circumstances of individuals living in a small village.
The movie has a strong underlying message, showcasing the importance of being an entrepreneur in your own land, rather than taking skills and qualities abroad. The film portrays Punjabis living abroad as hardworking and successful people in the eyes of their fellow citizens back in Punjab.
Successful and globally popular Punjabi singer and actor Harbhajan plays the lead role in this film. He is ably supported by Kimi Varma, a familiar face in Punjabi cinema.
Like most Manmohan Singh movies, Mera Pind also has a perfect mix of romance, family bonding and a strong musical score. As a director, Manmohan Singh, has many box office hits to his credit including Mitti Wajaan Maardi, Asaan Nu Maan Watnaan Da, Jee Aayaan Nu, Yaaran Naal Baharaan and Dil Apna Punjabi.
He is also an award winning cinematographer and has worked on Bollywood movies like Darr, Dilwale Dulhaniya Le Jayenge, Dil To Pagal Hai and Mohabbatein.
Mera Pind is expected to be a success in UK cinemas when it releases (by Adlabs Films based in London).