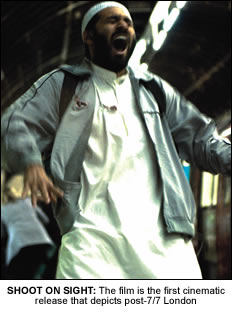 THE PRODUCER of a film based on the aftermath of the July 7th bombings in London has announced he will donate a portion of the films profits to a memorial set up for the victims of the 7/7 bombings.
Aron Govil, producer of ‘Shoot on Sight’ announced the move just days before the film releases nationwide across the UK.
The film, the first to depict the climate of fear in post-7/7 London after the bombings, was originally scheduled for a July 11 release but was delayed out of respect to the families of the 7/7 victims.
Mr Govil said the film “raises important questions about the climate of fear post 7/7”.
“While we are mindful that the families are still grieving, it is important to look at the climate within which Londoners now live and work and have been forced to deal with on an ongoing basis. Everywhere, people of Asian appearance have borne the brunt of increased stopping and searching,” he added.
“The entire project has been funded by me and distributed independently as I strongly felt it was a topic that needed to be addressed. It does raise some uncomfortable racial issues, but once UK audiences see the film, they will, I hope, see that the film portrays a balanced viewpoint and leaves the audience to decide which side they wish to be on”.
The film tells the story of an innocent Muslim man who is wrongly killed by police in the wake of 7/7 and includes an all-star cast including Brian Cox, Greta Scacchi, Naseeruddin Shah, Om Puri, Ralph Ineson and Sadie Frost.
Director Jag Mundhra was inspired by his experiences in the immediate aftermath of the London bombings.
He found that life and the way he was perceived by Londoners had completely changed and was struck by how even the most basic of everyday routines had been irrevocably altered.
“Having lived and worked in London for many years I became very aware of and affected by how peoples’ attitudes were changing towards me. Taxi drivers would not stop for me in the days following 7/7 and I could completely understand why,” he said.
“The fact that I had always found London to be an extremely culturally tolerant city made this change in atmosphere all the more shocking.”
Shoot on Sight will be released in the UK nationwide on 22 August 2008.