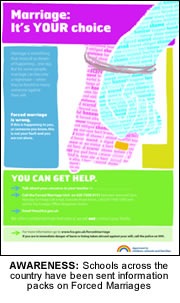 SCHOOLS across the country have been sent information packs on forced marriages, the government revealed today.
The information pack will include two posters, a leaflet and a discreet information card, which have been produced with the help of young people, schools, local authorities and support groups.
Children’s Minister Kevin Brennan launched the new initiative at the Tackling Honour-based Violence Road Show in London today.
Mr Brennan said it was important schools raised awareness of issues such as forced marriages.
“Schools have a crucial role to play in teaching children that forced marriage is wrong and telling children about the help and support that is available to victims and potential victims”, he said.
“I have written to all schools stressing the stressing the importance of raising awareness of this issue, especially in these critical last weeks before the start of the summer holidays.”
The new materials for schools have been posted to all secondary schools, local authorities and Local Safeguarding Children Boards, Mr Brennan added.
The London roadshow is the seventh in series of roadshows across the country organised by the Government to help tackle honour based violence.
Speaking at the roadshow, Justice Minister Bridget Prentice MP announced that the Forced Marriage Act would come into force on the 25th of November this year.
On top of current criminal protection, the Forced Marriage Act will provide civil remedies to protect victims or potential victims of forced marriage.
Justice Minister Bridget Prentice MP said: ‘The government has made great strides in tackling domestic violence and forced marriage. The new Forced Marriage Act is a powerful tool and will go a long way to ensuring that no-one will be forced into marriage against their will and those already in such marriages will receive protection.’
The roadshow brings together the Crown Prosecution Service, police, health services and local charities to increase participants’ understanding of the problems of honour-based violence so that they are more prepared to spot the tell tale signs, share best practice from across the country and help those who suffer.
The Government already supports victims of honour-based violence through a new national helpline for victims, partly funded by the Government and run by Derby-based charity Karma Nirvana.