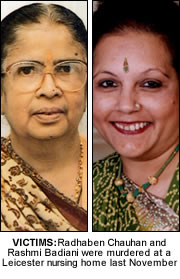 A MAN who killed two “defenceless” women at a Leicester nursing home has pleaded guilty to murder.
20-year-old Nathan Mann attacked and killed Rashmi Badiani, 56, and Radhaben Chauhan, 72, as they slept in their room at the Hayes Park Nursing Home, Leicester last November.
He pleaded guilty to murder at Nottingham Crown Court today and will be sentenced on Wednesday.
The two women were residents at the Hayes Park Nursing Home on Cropthorne Avenue on the Rowlatts Hill Estate, Leicester.
They were found dead in the room that they shared at the home shortly before 4am on Wednesday November 7, 2007 by a member of staff conducting a routine check.
The officer who led the police investigation, Detective Chief Inspector Phil Smith described the attack as “cowardly”.
He said: “Mann is a violent and dangerous individual.  He took the lives of two defenceless vulnerable women in an unprovoked and cowardly attack as they lay in their beds.
“This was a horrific incident that has devastated two families now united in grief.  Today’s guilty plea has spared them the distress that a full trial would bring and I hope that once the sentence is handed out by the judge they will be able to begin to rebuild their lives. 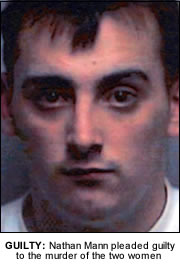 “This was an intensive investigation, particularly in the early stages.  The investigating team worked tirelessly to find the evidence needed and I would like to praise them for their dedication.”
Mr Lawrence English, Leicester Crown Prosecution Service Trials Unit Head, added: “This was a difficult and distressing case where the police displayed great dedication in their determination to bring the perpetrator to justice. The CPS worked closely with the Police from the outset as a Prosecution team.
“Our thoughts today are with the two families who have suffered greatly as a result of these horrific crimes but we hope that these convictions have brought some measure of justice for their loved ones.”