Home Interviews Khiza: ‘Asian Talent is worth the push’ 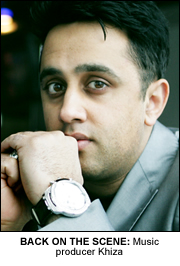 Music producer Khiza knows the British Asian music scene like the back of his hand.
During his 10 years in the business he’s seen the highs and the lows of an ever-changing music industry. Since his last album hit ‘Loyal to the Game’ two years ago Khiza has been on a scouting mission across the UK, India, Pakistan and America as he builds the foundations of his new record label. His latest project brings American R&B to the realm of British Asian music. Rising London star Shayla and American artist Ginuwine combine in the major international song Baby: Dil Deewana which has featured in a special ‘Making of the Video’ on MTV Base. Throw in Bollywood actress Neha Dhupia who features in the video and you’ve surely got a recipe for success.
We hooked up with Khiza to talk about his latest venture in the music industry…
Khiza it’s been a while since we last saw you on the music scene, what have you been up to?
I have been involved in developing a high calibre branded record label Utopia Consulting Ltd which fuses mainstream artists with up and coming Asian talent to give them the platform to go world wide. I travelled to India, Pakistan and America for a year to consolidate relationships to make sure our talent gets the best deals and finally bring some standards back into the Asian industry where record labels are concerned.
I have also been developing some new talent such as the eagerly anticipated producer Shayal who’s debut single with Ginuwine which features Neha Dhupia in the video releases on the 14th July 2008. Aryana, a bilingual Persian R&B diva, will also be featuring on my exclusive signing Jay’s album. You’ve got to see this collaboration to believe it. And finally, to match Atif Aslam I’ve been polishing a rough diamond called Ali Hash, 18 years old and a massive talent.
It’s been 2 years since the release of your last album ‘Loyal to the Game’. Did you make a conscious decision to take a break from the music scene?
As I matured as a producer, and after over 10 years and 13 albums I have developed bigger and better networks and have now begun to raise the standard. Big quality productions, mainstream media and Bollywood is in my sight now. I mean Shayal’s single has the first MTV Base- The Lick coverage of the making of the video and is A-listed across all the major radio stations. This is what I am about now.
You’re working with up and coming artist Shayal on his new album – the first single, Baby: Dil Deewana is out next month. How excited are you about the release?
This single is the first ever ‘Hollywood meets Bollywood’ production where the artist Ginuwine flew in with his entourage to shoot the video from America. In his 10 year career, 8 million selling albums which went twice platinum, Ginuwine has never filmed in the UK- we are the first. We will also be touring India with Ginuwine, we are really making a statement that Asian talent is worth the push and Ginuwine is giving that credibility.
Tell us a bit about the single, what can we expect?
The single has been built from scratch – no Indian samples or revamped classic melodies. The Asian vocals were recorded in London and composed by Kiran Thakrar and voiced by Anu Shukla both from the UK band Strings.
Our in house lyricist Ray Bradford penned the tune and Ginuwine gave the final touch. We did this for our people, we
didn’t cut any corners and it took over a year to co-ordinate the project. To put the icing on the cake our Indian partners identified 3 Bollywood actresses – Katrina Kaif, Priyanka Chopra and Neha Dhupia – to feature in the big budget video in London. After a screening process Neha Dhupia was selected and flown in along with Bollywood’s leading stylist Rocky S renowned for his Yash Raj movies and styling
Beyonce on her last tour. 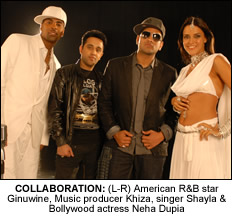 You’ve roped in some heavyweights for the single – starting with R&B star Ginuwine. How did this collaboration come about?
Ginuwine was in the country touring when he heard Shayal’s sound in a local club and instantly spotted his talent. The rest is history.
What was it like to work with Ginuwine?
If you have a friendship with Ginuwine then he’s the man. Very humble, down to earth and a hard working family man. He taught the team a great deal about music and the music business.
What was Neha like to work with? Any Bollywood tantrums to report?
Again we are lucky that we already have forged great friendships with all the stars and Neha was a true role model for upcoming stars. She was receptive, hardworking, dedicated and open to improvisation. No tantrums, no hassle she was a true artist!
Aside from the work with Shayal, when can we expect your next album?
My next album will be a global album and focus on Bollywood and Pakistan and I will be making a huge noise. My best production to date. And remember my sound is Genre Non Specific! – So you can expect the unexpected!
Interview by Zakia Yousaf
Baby: Dil Deewana, taken from Shayal’s debut album ‘My Moment’ is available to download now