15 years for failing to tell police about plot 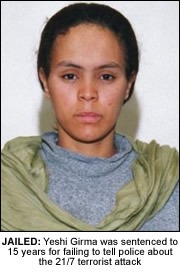 THE WIFE of failed 21/7 bomber Hussain Osman has been jailed for 15 years today for failing to notify police about the terrorist plot.
The Old Bailey was told Yeshi Girma, 32, knew of the terrorist plot which her husband, Hussain Osman, was part of yet failed to tell police.
Osman was convicted of conspiracy to murder last year alongside fellow failed bombers Yassin Omar, Ramzi Mohamed and Muktar Ibrahim. They were each jailed for at least 40 years for the plot which aimed to bring carnage to the streets of London just two weeks after 7/7.
Girma, who has three children by Osman, denied the charges against her.
But she was found guilty by a jury earlier this week of having information about terrorism and “without reasonable excuse” failing to disclose it.
She was also convicted for assisting an offender and failing to disclose information about Osman’s involvement in the plot.
Prosecutor Max Hill told the court: “She had some information about what the bombers intended to do on July 21, but failed to bring this to the attention of the police.
“Had the bombers successfully and completely detonated the bombs on busy Tube trains that day, there would have been carnage and mass murder.
“Yeshi Girma could have attempted to prevent the attacks, which, but for shortcomings in the production of the explosive devices, would have killed and injured many people.”
Girma’s brother Esayas, her sister Mulumebet and her sister’s boyfriend Mohamed Kabashi were all convicted of aiding Osman after the bungled attack.
The brother and sister were jailed for 10 years. Kabashi was sentenced to nine years in prison.