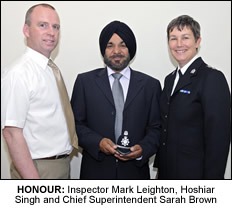 A BRADFORD man who worked as a special constable for over 17 years has been honoured.
Hoshiar Singh was awarded a certificate of commendation from West Yorkshire Police for his tireless work in building bridges between the force and Bradford’s multi-cultural community.
Hoshiar worked as a Special Constable for 17 and a half years and during which time he was promoted to Section Officer and presented with a Good Conduct and Long Service medal.
Since finishing as a Special Constable he has continued his links with West Yorkshire Police and is Vice-Chair of the Minorities Police Liaison Committee which aims to promote better understanding between the police and Bradford District communities.
Hoshiar is also a founding member of the Bradford South Hate Crime Scrutiny panel which monitors police hate crime investigations providing guidance and support when necessary.
Responding to the award, Hoshiar Singh said: “I want to make sure we all have a nice place to live in. I strongly believe in putting something back into my community. My philosophy is looking after each other and being nice to one other – I want to bring this to the people in Bradford and make sure we can all live and work together.

”When I was working as a Special Constable there were times when people didn’t speak English and I was able to step in and help. My ambition is to make Bradford a safe place – not just in terms of policing but also in health. I am particularly interested in improving the health of disadvantaged people.”


Inspector Mark Leighton – Bradford District Community Race Relations Officer said: “My colleagues and I have worked with Hoshiar on many occasions on issues concerning the many different communities in Bradford. His unbiased and helpful guidance has significantly helped us in our roles. He fully deserves this recognition.”