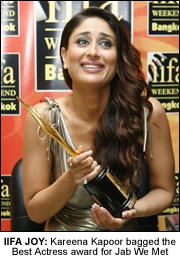 SHAH Rukh Khan’s biggest film of the year swept the IIFA’s in Bangkok yesterday – despite the Bollywood star snubbing the ceremony for the third year in a row.
Khan’s hockey film ‘Chak De India’ scooped the Best Film award, with Best Director going to Shimit Amin, and Best Actor for Khan himself.
While the actor has snubbed the awards since 2005, the IIFA’s have plenty of support from other Bollywood stars.
Kareena Kapoor made the trip to Thailand to pick up the award for Best Actress for Jab We Met, while newcomers Ranbir Kapoor and Deepika Padukone were handed the Best Debut awards.
Konkana Sen Sharma and Irrfan Khan won the Best Actor in Supporting Role female and male, respectively, for the film ‘Life in a Metro’.
Vivek Oberoi’s powerful performance won him the Best Actor in a Negative Role for Shootout at Lokhandwala while Govinda’s impeccable timing got him coveted IIFA Trophy for Partner.
Music Maestro A R Rahman won the Best Music Director for his soulful tunes in Guru. He also bagged the Awards for Best Background Score and Outstanding Contribution to International Cinema. While Shaan was rewarded for his rendition ‘Jabse Tere Naina’ from Saawariya, Shreya Ghosal was recognized with the Best Playback Singer female for Barso Se from Guru.