Shaun Toub talks about his role in the 2007 gem 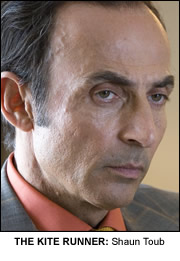 Manchester-born Shaun Toub can be called a veteran of the Hollywood film machine.
He has appeared in over 60 projects – ranging from TV gems such as Lost and ER, to high-grossing films Crash and Iron Man. One of his biggest films to date is The Kite Runner- the 2007 cinematic adaptation of Khaled Hosseini’s novel which became a critical hit. The film took the industry by storm receiving a host of Academy Award, Golden Globe and BAFTA nominations.
With film releasing on DVD this month we caught up with Shaun to talk about his experience working on The Kite Runner…
Hi Shaun, how are you today?

I’m great. It’s a wonderful time for me. The Kite Runner, which is very special to me, is

coming out on DVD and my other film, Iron Man, keeps on making millions at the box office. I think it made $US300 million worldwide in its first 10 days, so I can honestly say life is wonderful.

It must be. If you add your other recent roles, including your powerful performance in 2005 best picture Oscar winner Crash, you’re having a golden run.

The Kite Runner, of course, is based on the best-selling novel by Khaled Hosseini. Was it daunting for you, the rest of the cast and the director Marc Forster (Monster’s Ball and Finding Neverland) to live up to the pages in the book?

To make a book into a movie, it’s a very difficult task. A book is basically a six hour movie and our imagination reading a book can be so much more colourful and stronger than what can be shown on the screen. But, to do a job like what Marc did and bring the book to life and on to the screen, it was incredible. The author of the book, Khaled, loved the movie. Some people loved the book so much they were reluctant to see the movie because they thought it would ruin the experience for them, but when they saw the movie they were wowed by it.

How did you get cast to play Rahim Khan in The Kite Runner? It’s a very important character and, without giving too much away, you have a pivotal, heart-breaking scene.

It’s actually an interesting story how it came about. The first time I heard about the film was when I was at the Director’s Guild Awards during Crash’s Oscar run and I was introduced to Steven Spielberg. He told me, ‘Oh my gosh we should talk to you about The Kite Runner’. I said ‘I would love to’.

What happened from there?

Forster is in London and would like to speak to you. I said, ‘Well, I’m busy shooting. Why don’t I talk to him when I’m back in LA?’ My agent said ‘No, no, no, he wants to speak to you right now. The Kite Runner is a go’. I said ‘I can’t. I’m busy shooting here in the south of Italy and it will take at least eight hours to get to London’.

Did you end up going to London?

My agent said: ‘OK, we’ll send you the script. You read it and tell me what you want to do.’ He sent me the script, I read it and went ‘Oh my goodness!’ After Crash, I didn’t think there would be anything out there that would rock my world. The Kite Runner script was amazing and then I read the book.

So, did you avoid that trip to London to meet Marc Forster?

No (laughs). Actually, I left the set in Italy at 2am on a Friday, they drove me to the airport which was 90 minutes away. I caught a plane at 6am. Changed planes in Rome. Then I arrived in London at 1.30pm, went to my hotel and had an ice cold shower, then I had a 3pm meeting with Marc. We clicked right away. 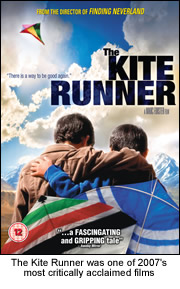 There was a lot of Oscar buzz for The Kite Runner, but it did not come to fruition. What did you think about that?

In my opinion, and many other people who approach me now, they say The Kite Runner was the best film of 2007. I know in time people will find this movie and wonder why they didn’t hear about it earlier.

I guess that’s what is great about DVDs. The public has a second chance to watch films they may have missed at the cinema.

Definitely. I promise The Kite Runner is one of the best movies that people can see. I know people who have watched it more than three times. It reminds me a lot of Crash in a weird way that, every time you watch it, you experience new things. It’s truly a magnificent film. I say that not because I’m in it, but because I really believe it in my heart.

I was surprised to find out The Kite Runner was shot in China. Obviously, it would be tough for security reasons to shoot it in Afghanistan, but why China? Why not, say, Morocco, where Hollywood has made plenty of films.

The Afghanistan of 30 years ago, where this story begins, doesn’t exist anymore. It has been destroyed. We wanted to shoot it in Afghanistan, but it was too unsafe. So, we basically went four hours across the mountains to China. We were in southern Mongolia.

There was a hotel. They put new carpet in for us which was nice (laughs). You do the best you can. We thought ‘This is so tough’, but then, I’ll tell you, as actors we had it easy. The crew and director had it a lot tougher. But, once we saw the finished film, we all knew it was worth it.

How did the two young lead actors – Zekeria Ebrahimi and Ahmad Khan Mahmoodzada – handle the pressure of being the stars of the film? Is it true they were discovered in Afghanistan and had no acting experience?

Yes. They didn’t have any acting experience. They were selected from the streets of Afghanistan, which is unreal. As the audience will see, they did an amazing job.

There was quite a lot of controversy ahead of the release of The Kite Runner in theatres. There were reports that people in Afghanistan would be offended, particularly by a rape scene that is central to the story. Now, months later, what was the fallout?

I know the Afghan culture. I understand it. I kept telling everybody too much was being made of it. Nothing ever came about. Nothing ever happened. It (the rape scene) was done very tastefully. It was a part of the story that needed to be told. You could not have The Kite Runner without that scene. 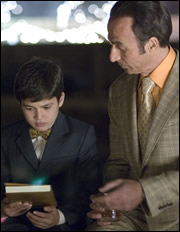 How are the boys – Zekeria and Ahmad and some of the other young Afghan actors – going? There were reports they would be moved to the United Arab Emirates for their safety.

The boys were moved. There was a lot of hoopla, but nothing severe. Nothing happened.

I think they brought them out to Dubai. I haven’t heard what happened after that. I know a

couple of kids wanted to go back to Afghanistan. Kids want to be in their own environment. It was fun for them. I think they will look back at this years down the line and think ‘What an experience’. They are great kids, they got to see the world. They went to Dubai and they did their thing and I think they were ready to go back to school and get on with their lives.

Your career is pretty amazing. There’s the feature films that cover different genres – The Kite Runner, Iron Man and Crash – but you’ve had roles on some of the great TV shows – Seinfeld, The Sopranos, ER, Married with Children, Columbo, Dragnet and the list goes on. What’s your favourite memory from TV?

There have been so many great memories because I’ve done more than 100 episodes of TV. A memorable one was my first job. It was on the show Hunter (1988). I remember the director telling me, ‘I know this is your first job. Don’t be nervous. Just be natural. Trust yourself and go for it’. It was also fun to work on Seinfeld.

With your success you’ve become hot property in Hollywood. There must be a lot of scripts being sent to your agent.

Thank God! Since Crash, things are great and I haven’t had to audition for any roles. To have choices, it is a lovely place to be. I have to be careful, but it is difficult sometimes when you say no to projects because there’s a lot of money involved. You have to be mindful of what your goal is. So far, I haven’t done anything that I’m ashamed of. Even when I did Bad Boys 12 years ago with Will Smith. One scene I had in Bad Boys has become a cult favourite. I became famous for being the ‘infamous, mother bitch!’ (laughs). I actually wrote that scene. I love to add a little something to each role.

What role, would you say, has had the biggest impact on the public?

I would say Crash and The Kite Runner. I remember being at the premiere for Crash and this Spanish man, he was aged in his 40s, walked up to me and said ‘I want to thank you’. I said ‘Thank me for what?’ He said ‘You really opened my  eyes tonight through your character. It made me see myself in 20 years time. You made me realise I have so much anger in me that I need to get rid of. I don’t want to be that character and be so frustrated with life in 20 years’. It was very interesting.

That must make your job rewarding.

It’s why movies like Crash and The Kite Runner touch your heart and open your mind. The Kite Runner is not an Afghan story, but it’s a universal story. So many people from so many parts of the world reacted to it. People connected to the human aspect of it. Even Iron Man. It’s entertaining, but there was a message in there about war and what weapons do.

Your character in Iron Man, the scientist Yinsen, comes to, let’s just say, a grisly end in the film. It’s a shame we won’t see you in the Iron Man sequel.

I am actually on contract with them and this is the comic book world so you never know.

In the comic book world anything can happen!