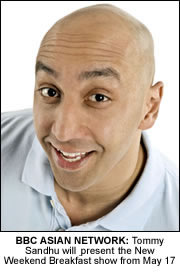 IF there’s one thing you’ll soon realise about Londoner and general all-round Media King- come – DJ Maestro Tommy Sandhu is that he can talk for England! Quite apt then that he’s landed himself the Weekend Breakfast show on the BBC Asian Network. Here’s a man who loves talking, loves music and will no doubt soon love the taste of strong coffee as he gears up for the launch of the early-morning show later this month. We caught up with Tommy to find out why he wants us all up at the crack of dawn!…oh one more thing, did I mention he’s practically best mates with Cilla Black and replaced ‘Our Graham’ on Blind Date? (Fantastic stuff…I wonder if my mum would like him?)
Tommy you’re fronting the all-new weekend breakfast show – are you excited, nervous?

I don’t really get nervous. I’m definitely excited, but also quite shocked! I think it’s amazing that the BBC trust me to have my own show! It’s going to be outrageous! It’s nice to be starting something brand new rather than take over a show from someone else! I’ve got a lot of freedom to have fun and make the show the perfect way for ANYONE to start their weekend!

Have you started practicing dragging yourself out of bed in time for the real thing?

This is actually a genuine concern of mine as I’m known for being a late night kinda guy who’s never up in the morning! So, ever since I found out I’ll be hosting the breakfast show, I’ve been treating my sleep like a training schedule. Everyday I set my alarm to wake up 15 minutes earlier than the day before! Therefore I’m gradually adjusting my body into my new early morning lifestyle! And I want all the listeners that find it hard to wake up, to do the same! Lets all get up together!!

Tell us a bit about the show – what can listeners expect?

First and foremost – GREAT MUSIC!  But also sport round ups and Bollywood news. Music wise we’ll be playing everything big in Bollywood, Bhangra and Britain! Plus, I think it’s fair to say, I don’t take life too seriously, so you’re guaranteed to have some cheeky chat along the way!

How do you intend to juggle your DJ work with the early morning weekend starts?

The show is my priority – I love djing and still get a real buzz from playing to a packed out club … but its not over – I’ll still be playing in London clubs midweek, but for the first time in about 10 years, my weekends will mean getting up in the early hours rather than just getting in! Now, I can actually have breakfast in the morning rather than mid afternoon!

Some people may recognise you from Desi Dna – does TV work make a nice change from radio?

I’ve been predominantly working in television for about 8 years now and I love it. I’ve done travel series, gadget stuff and reality shows! Which have all allowed me to see and do amazing things!  But radio is so much more versatile than TV – you can arrange interviews and attend events on your own which gives you a lot of freedom to do more! With television, you obviously need your cameraman, sound guy, director, filming permission etc … so im loving the opportunities and flexibility that radio brings!

Let’s delve into your past! You replaced ‘Our Graham’ as the voice of Blind Date – what was that like?

That was a real shock – the way it came about was very random! I’d been commissioned to re-make the theme tune for Blind Date and was in the studio at the time. Like most people, I didn’t like hearing my own voice back so I never thought of myself as a ‘voiceover artist’ at all! But then I got news that they were trying out voices to replace ‘Our Graham’ and my agent / manager said I should give it a go! We wrote some cheeky intros for Cilla and she loved it … it was nice to know that she personally approved of my voice! 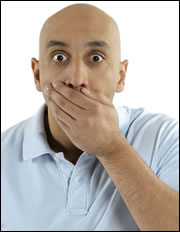 What was it like working with the nation’s favourite Cilla Black?
Cilla’s amazing! I’ve met so many people through her and learnt so much from just being around her.  She an example of the success you can achieve when you’ve got talent and the discipline to work hard! When you consider her singing career, her connections to legends like The Beatles, her success in the charts as well as all the hit TV shows she’s had … its simply phenomenal! She’s always got great advice to give and little pearls of wisdom! Mind you … she’s also a bad influence! As im writing this, im in bed nursing a tender head from leaving her apartment at 3am last night after several glasses of champagne! That lady can seriously out-party anyone!
You’ve interviewed some pretty big celebrities. Who was the best interview? And the worst?

There’s been a lot of people I’ve met through London showbiz reporting (on Nikki Bedi’s Asian Network show) that have seriously wowed me! Richard Attenborough felt like a really magical man … Jeff Goldblum was Mr Super Cool … Johnny Depp was very mysterious but hilarious too! There hasn’t been anyone who’s been bad … Akshay Kumar surprised me as I thought he would be cheeky or funny because of the comedy roles I’ve seen him in, but he’s actually a very focused and disciplined artist.

If you could get any celebrity on your breakfast show who would it be and why?

Well, it’s not a case of “if” … we WILL have celebrity interviews on the show … it’ll be a mix of legends and new stars! My ideal choices would be screen icons like Amitabh Bachchan or Robert De Niro! Or great singers like Madonna or Alicia Keys!  But if I HAD to choose just one … then I have to go with someone who influenced my life PERSONALLY … so I’d pick MC Hammer and make him do the running man with me!

Finally, in as many words as you like here’s your chance to convince our readers why they should tune into your breakfast show next month

Its simple … I know what weekends are like … you’ve got to go shopping, you’ve got to visit your family, you got school or housework to do … weekends always whizz by and before you know it, its Monday again. Well, it’s my job to kick start your weekend in the right direction. To bring a smile to your face! From now on, every weekend will be a celebration! Whether you turn on Asian Network through your digital television boxes, your DAB radio or online … you’ll feel all warm and fun inside! We’re going to unite all the happy people together from around the world in a weekend of breakfast time festivities! You don’t have to be out of bed, listen whilst you’re under the covers … be in your pyjamas … be naked for all I care … just be there! And in years to come, you can tell the future generations about how you were part of radio history … how you were there when Tommy Sandhu changed weekends forever!

Wow! That deserved an Oscar!
You can listen to Tommy Sandhu on the New Weekend Breakfast Show on the BBC Asian Network from Saturday 17 May
Interview by Zakia Yousaf