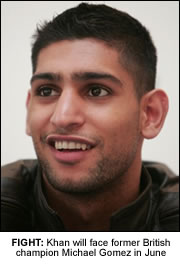 AMIR Khan is to face former British champion Michael Gomez in Birmingham in June.
Manchester-born Gomez is a former two-time British super-featherweight champion and is expected to give Khan his toughest challenge to date.
He has a hard-hitting 35-8 (24) record, but Khan will start a strong favourite for the fight.
Khan said he was expecting the encounter to be “explosive”.
“Gomez will walk forward into my punches and I expect it to be an explosive fight and an interesting build-up”, he said.

“But if he starts mouthing off and getting into my face it will be part of the experience for me.

“To be honest I think I’m above this domestic level now but each fight is bringing something different. There is no way Gomez is going to be as fit as me so I expect a spectacular stoppage.”
Gomez said he would take the challenge to his opponent.
“Amir’s a very good fighter but he’s never fought anyone like me. I’m going to take him out of his comfort zone and get in his face before the first bell has even sounded,” said Gomez.

“I save my best for the big occasion. I went to Scotland to fight Alex Arthur, who had a virtually identical record to Amir, and I blew him away in the fifth round.

“I’m going to do the same thing to Khan. I’m not here to make up the numbers.”