The Footballer with Sunny Sahota 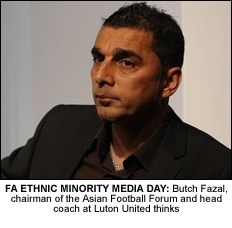 Welcome back to the BCFA’s column which outlines the proactive work that we and the FA as a whole are carrying out to increase the number of Asians into the game and highlight the Asian community’s participation in football at all levels players, coaches, volunteers, fans and referees.
Last week the FA held an Ethnic Minority Media Day which highlighted the current lack of up and coming Asian players breaking into professional football in England alongside showcasing a range of Asians in Football projects which will hopefully give talented youngsters a route into the academies of professional clubs over the next few years.
One of the attendees at the event was Butch Fazal the chairman of the Asian Football Forum and head coach at Luton United, an FA Charter Standard youth football club with a high percentage of Asian players on their books.
“Over 25% of Luton’s population is made up of BME (Black and Minority Ethnics) communities and football is definitely a popular game for Asian youngsters in the area,” confirmed Fazal.
“Modern day Asian parents are also willing to get involved, which wasn’t the case a few years ago, and we get plenty of help in driving the kids to away games or putting up the nets on a Sunday morning.”
Fazal believes that the England squad are also serving as role models for local Asian communities: “This season’s pre-season training saw a lot of our youngsters wearing England shirts and I can’t recall that happening on such a large scale in the past.
“It certainly shows that the new generation of Asian youngsters are starting to identify with the players they see on TV regularly.”
Luton United have also opened their doors to role models away from football as well with England spin king, Monty Panesar, helping out at the club: “Monty is from the local area and it’s great when he pops down to training and games because he’s reached the top of his profession which shows what can be achieved”.
However Fazal admitted that a lack of communication could be holding back other Asian youngsters around the country: “The FA have recognised that grassroots clubs need decent facilities but there’s a lack of information in Asian communities on how to access funding.
“If we could get past those barriers, then we could get more Asian kids playing the game and hopefully a breakthrough at senior level.”
Luton United weren’t the only Asian grassroots football organisation in the spotlight with both the Asian Football Network, Khalsa Football Academy and the Muslim Women Sports Foundation also presenting at the Ethnic Minority Media Day.
The AFN’s Kuljit Randhawa has been working with the Essex FA on Level One courses for Asian females while the Muslim Women Sports Foundation will be representing the country at next year’s Islamic Games futsal tournament.
Khalsa Football Academy’s Bal Singh is one of the most decorated Asian football coaches in the country, having worked his way through the ranks to Level Three standard.
The KFA is linked to Southern Football League side, Hitchin Town, and Singh believes that Asian players must not be isolated from the mainstream game: “If we want to give our youngsters a chance to make it in professional football, then integration is key for both progression and participation.”
Khalsa have also been doing their bit for international relations with Singh overseeing coaching trips to AC Milan plus anti-racism events in Spain 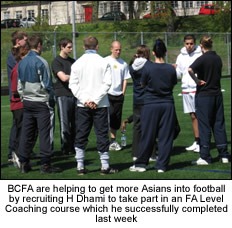 In further news the BCFA are helping to push to get more Asians into football by recruiting H Dhami to take part in an FA Level Coaching course which he successfully completed last week to inspire further Asians into getting into football by taking the first step onto the FA coaching ladder.
H Dhami believes that there is huge potential in the Asian community to create a number of top flight footballers and coaches and by undertaking the course he hopes to break down some barriers and help youngsters to get more involved in the ‘beautiful game’.
H Dhami is a huge football fan and follows the trials and tribulations of Arsenal. As a youngster H Dhami had a real passion for football and used much of his spare time kicking around a ball in the local parks. He showed great potential and contemplated in taking the game up at a professional level however a torn ligament in his knee resulted in H Dhami to reconsider his career journey and concentrate on his other passion Music.
H Dhami undertook the course with support from the FA’s Brendon Batson who works primarily into encouraging participation in football from the ethnic community to help implement the FA’s ‘Football For All’ strategy into making the game more inclusive.
With the FA Level 1 coaching badge under his belt H Dhami will head to a school in Birmingham and take part in a coaching session to act as a role model to help inspire the kids to get involved in football.
H Dhami said, ‘I am very much looking forward to going into the Asian community in Birmingham to help encourage kids to fulfil their dreams and reach their full potential within the realm of football like I have within music.’
‘Football still remains a passion of mine and it will be fantastic to maybe help produce a top Asian coach of the future through this’.
The FA Level 1 coaching course itself is open entry whereby participants do not need any experience to take part just an interest in coaching and the motivation to improve their skills and understanding.