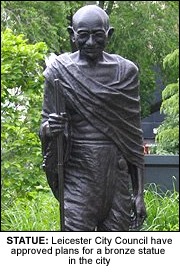 LEICESTER City Council has approved plans to erect a statue of Mahatma Gandhi in the city’s Belgrave area.
Leicester-based charity Samanvaya Parivar submitted plans for the bronze statue last year but was met with opposition from the local community who felt a local figure would be better suited.
The decision, which was made by the council yesterday, was met with approval from the charity who will donate £20,000 to pay for the statue.
Jitendra Acharya, spokesman for Samanvaya Parivar, said: “We’re delighted. There has been a lot of hard work from all the committee members of the charity and we’re thankful to the members of the public and the MPs who have supported us.

“We’re now looking forward to celebrating the actual opening of the statue. We’d like to involve all members of the community.

“We thought this was a very good way to express our appreciation and celebrate the multi-cultural community which exists in Leicester.”
The statue, which will be 7ft high and sit on a 5ft high plinth, will be stand on Belgrave Road – the heart of Leicester’s Asian community.
The decision by Leicester City Council is set to displease some Leicester residents who opposed the plan.
Earlier this year an online petition titled ‘No Gandhi Statue’ registered hundreds of signatures.
Lee Ingram, a Leicester resident who set up the first petition, argued that the city should commemorate local heroes.
“Gandhi is a historical figure connected to India. He has no connection to English culture or the English, therefore a statue of him would be more suitably erected in India”, he told The Independent in March.
But supporters of the statue, including Labour MP Keith Vaz said it was important to champion the work of Gandhi who promoted “inter-cultural harmony and cooperation”.