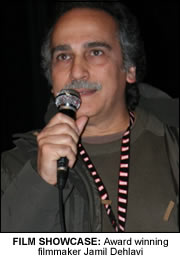 AWARD winning filmmaker Jamil Dehlavi is to visit Birmingham to present a double-bill showing of two of his most revered films.
The Indian-born director will showcase his 1981 film ‘Blood of Hussain’ and most recent work ‘Infinite Justice’ at a special event at the Midlands Arts Centre later this month.
Mr Dehlavi, a qualified lawyer, musician and artist, has received critical acclaim for both films.
‘Blood of Hussain’ was banned by the Pakistan military ruler General Zia-ul-Haq after he seized power in a coup de etat and became President of Pakistan in 1977.
His latest feature and the second film on the bill, ‘Infinite Justice’ has won critical acclaim for its depiction of post 9/11 events.

The film was awarded Best Dramatic Feature at the European Independent Awards, and the Robert Rodriguez Award for Excellence at the 2007 Hollywood Digital Film Festival.
This special event screening will be followed by a post-screening discussion with a chance for the audience to ask the director questions.
An Afternoon with Jamil Dehlavi, Sunday 30 March, MAC