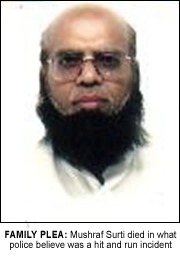 THE FAMILY of a father-of-six killed in a hit and run incident in Walsall have appealed for information to help catch the person responsible for his death.
51-year-old Walsall businessman Mushraf Surti was found lying in the middle of Broadway West, Walsall in the early hours of Monday morning.
A post-mortem examination confirmed Mr Surti died from multiple injuries consistent with being involved in a road traffic collision.
Police described Mr Surti as a “respected local businessman” who owned and ran Surti Newsagents on Broadway West.

His family appealed for anyone who had any information relating to his death to contact police.
“We appeal for information to be passed to the police in order that Mushraf’s wife, six children and extended family can be informed as to how he was killed”, a statement released by the family said.

“Mushraf was a hardworking family man of good character within the community and we hope that someone can pass information as to what happened to him.”

Inspector Steve Willetts from Walsall police station said: “After looking through CCTV images and speaking to witnesses we believe that we have identified the vehicle involved the collision which resulted in Mr Surti’s death.

“The car is a light-coloured Mercedes C Class, which would have had significant front end damage.

“We appeal for anyone who may have seen this vehicle, or for the driver himself to come forward and speak to us

“Mr Surti’s family has been devastated by his death and they deserve to know what happened to him.”
Police are keen to speak to anyone who was in the area of Broadway West between 5.30am and 6am on Monday, and urge people with any information to call Walsall police station on 0845 113 5000.