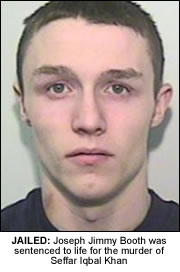 A MAN and a boy who brutally murdered a teenager by stamping on his head have today been sentenced to life in jail.

Joseph Jimmy Booth, 18, of Tildsley Street, Great Lever, and a 15-year-old boy who cannot be named for legal reasons, pleaded guilty to the murder of Seffar Iqbal Khan In February,

Booth was today, sentenced to life in jail, and ordered to serve a minimum of 12 and a half years before being eligible to apply for parole.

The 15-year-old was also sentenced to life and ordered to serve at least 10 years before being eligible to apply for parole.

Seffar, 19, of Roxalina Street, Great Lever, was found dead shortly before 7.20am on Monday 5 November 2007 in Heywood Adventure Playground in Heywood Park, Bolton.

He was discovered with serious head injuries and was pronounced dead at the scene.
His injuries were so severe that family members were unable to identify him, police said.

On the afternoon he was murdered, Seffar met up with some friends in the playground where the group chatted for several hours and had a few drinks. At about 11pm, the group dispersed to go to their various homes and Seffar was left alone in the park.

Shortly afterwards, Seffar bumped into Booth and the 15-year-old boy in the park. Booth had been drinking and the three got into a verbal altercation. There was a history of bad blood between the three and the argument soon turned violent when Booth punched Seffar in the head.

Seffar subsequently ran off but was pursued by the pair through the park. When they caught up to him, Booth punched him again, causing him to fall over, and started kicking him while he was lying on the floor. While on the ground, Booth and the 15 year-old boy kicked and stamped Seffar on his head

The 15 year old boy then rifled through Seffar’s pockets as he lay motionless on the floor and stole cigarettes and a lighter.

Seffar’s body was discovered about 7.20am the following morning by a man who was out walking his dog.

Police and paramedics were immediately called to the scene where Seffar was pronounced dead.

Later that evening, Booth and the 15-year-old boy returned to his home where they told family members they had been in a fight with an Asian male and the young boy pointed to blood on his right trainer.

The following morning, concerned family members and friends confronted Booth and the young boy about what had happened after news of the murder spread among the local community.
Later that day, both presented themselves at Bolton Police Station where they were arrested on suspicion of murder.

A Home Office post-mortem examination confirmed the cause of death was head injuries sustained during a violent assault.
Seffar suffered multiple contusions, fractures to his nose and cheek and had a serious bleed on the brain. His injuries were so severe that members of Seffar’s family were unable to identify him.

As the pair were being interviewed, forensic scientists informed officers that the footwear of both suspects had traces of blood from Seffar and on Wednesday 8 November 2007 the pair were charged with murder.

Superintendent Andy Durkin, based at Bolton Police Station, said: “This was a brutal and sustained assault on a young man who had his whole life ahead of him.

“The severity of the head injuries he suffered was shocking and it rightly caused outrage in the local community.

“However, I would like to stress this attack was not about race. Seffar and the two offenders had grown up together, side-by-side, in the same community and there was history between Seffar and the two boys. Unfortunately, that ill feeling turned to violence on that fateful evening and it ended with a young man losing his life.”