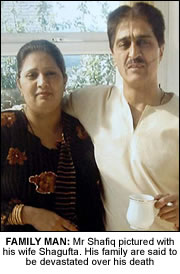 FOUR people have been charged over the death of a Burnley father who died whilst trying to protect his son.
Father-of-seven Mohammed Raja Shafiq died earlier this week after he tried to stop a fight in Thompson Park, Burnley.
He was hit over the head with a metal bar and stabbed in the abdomen. He died later in hospital.
Twenty-year-old Mohammed Bilal Bhatti of Holcombe Drive, Burnley and another 16 year old man have been charged with murder and violent disorder.
Omar Khalid of Fairfield Drive, Burnley and Mohammed Shahdab Akhtar of Scott Park Road, Burnley, both 19, have been charged with violent disorder.
A fifth man remains in custody.
The Independent Police Complaints Commission are investigating the way a call made by Mr Shafiq to the police minutes before he was attacked was handled.
Lancashire Constabulary have admitted there were “concerns” over the way the call was handled and have referred the incident to the Police Complaints Commission.