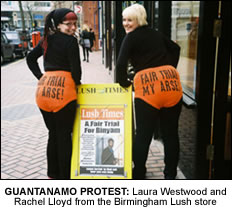 GUANTANAMO Bay is Pants – that’s the message from cosmetics company Lush whose staff have begun a week-long campaign against prisoners’ treatment at the notorious American prison camp.
Staff across most of the company’s UK stores will wear orange knickers bearing the slogan ‘Fair Trial My A***’ for a week to highlight the illegal detention and torture of men held in the world’s most notorious of prisons.
Lush decided to take action when co-founder Mark Constantine learned of the plight of two current detainees-Al Jazeera News cameraman Sami Al Haj and British resident Binyam Mohamed.
Both men have been detained for five years without trial and are believed to have been tortured.
Mr Constantine met human rights lawyer and director of the charity Reprieve Clive Stafford Smith when at the memorial service for Dame Anita Roddick, founder of the Body Shop and an activist herself who worked closely with the charity.
To champion the cause of Sami and Binyam, Mr Constantine and his son perfumer Simon Constantine have invented a new fizzing bath ballistic called “Guantánamo Garden” which releases a hidden photo of Sami or Binyam when placed in hot water.
For the next week the company will be donating 100 per cent of the proceeds of its Charity Pot hand and body cream to Reprieve’s life-saving work representing prisoners who cannot afford legal representation.
The company has already donated £10,000 to Reprieve to send a Reprieve Fellow to work in Pakistan.
“Because Lush is a cosmetics company we normally campaign over the rights of mice and rabbits being harmed in pointless and cruel safety experiments”, said Mark Constantine. “But when humans are being treated worse than rats in a cage we knew it was time to launch an initiative to close Guantánamo”.
Clive Stafford Smith, who helped secure the release of Birmingham man Moazzem Begg from Guantanamo Bay, said he was “delighted” with Lush’s latest initiative.
“The most effective counter-terrorism strategy any government can employ is the universal enforcement of human rights, and Reprieve is delighted that the staff at Lush have taken up the fight for justice for the prisoners in Guantánamo Bay”, he said.